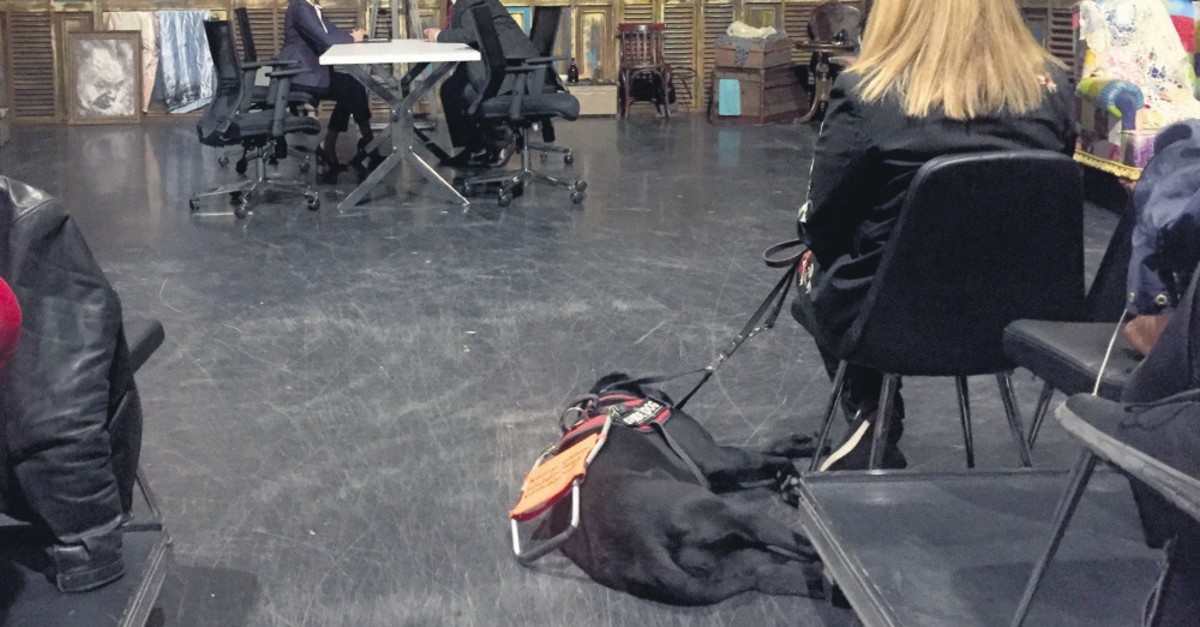 Nurdeniz Tuu00e7er watches the rehearsals of an Istanbul State Theaters' play with her guide dog Kara.
by Daily Sabah with AA May 18, 2019 12:08 am

Guide dogs are the best helpers for the visually impaired as they lead them everywhere, making life easier. Guide dogs are not considered pets but rather escorts for the visually impaired so they have to be allowed any place where their owners go. Step by step, institutions have begun to accept guide dogs in places where pets are not allowed, most recently the Istanbul State Theaters.

Visually impaired lawyer Mustafa Keskin made an application to the Istanbul State Theaters and asked the management if it is possible for him to go to a play with his guide dog Tabs. For the first time in Turkey, a theater company ruled that guide dogs could be allowed inside the halls with their owners.

To celebrate the new rule, the Istanbul State Theater hosted Mustafa Keskin and his guide dog Tabs along with lawyer Nurdeniz Tunçer, who is also a visually impaired citizen and the head of the Guide Dog Association, at Tekel Stage in Üsküdar, Istanbul. Tunçer and Keskin were present at rehearsals and the actual performance.

Istanbul State Theaters head Atilla Şendil said they were surprise to get Keskin's mail about his guide dog. "We had no such practice before, and we were actually not very well informed. After thorough research, we found out that guide dogs can attend performances with their owners. From now on, the visually impaired and their guide dogs are welcomed to our live performances whether it is a play or a concert," Şendil added. Tunçer said she is very excited about the new practice of the state theaters, adding that their primary concern is to make art more accessible to the visually impaired.

Founded in 2014, the Guide Dog Association aims to change the lives of the visually impaired with the help of guide dogs, a relatively new concept in Turkey. Guide dogs are usually chosen from among certain breeds that are known to be more meek and friendly to humans. The trainers of the association first examine the dogs to determine whether they are obedient and healthy. Once they pass the test, the dogs undergo a year of training. Following training, guide dog candidates are given tests, and if they pass successfully, the dogs are trained to accompany visually impaired people for up to six months. The dogs are given to the blind free of charge.