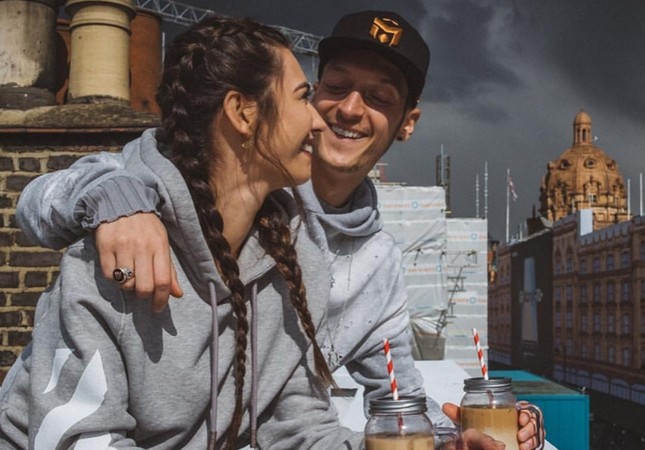 German World Cup winner Mesut Özil, who is to wed actress Amine Gülşe on Friday, received praise from the head of Turkish Red Crescent for donation to feed 16,000 while asking fans wishing to give gifts to donate to a charity which pays for operations for poor children.

"Many fans have asked me, my close relatives and friends about our wishes for tomorrow's wedding. As a professional footballer I am in a fortunate and privileged position," he wrote on his social media accounts on Thursday.

"However, I invite everyone who is willing and able to help to support a very special project close to both of our hearts that we will undertake with BigShoe.

"Amine and I will bear the expenses for surgeries of 1,000 children in need. I'd be happy if in addition, many more treatments all over the world can be fulfilled," he continued.


The Germany-based charity was founded in 2006, when Germany hosted the World Cup, and Özil has been involved with it for the past five years.

He called on fans to help the cause and donate for "many more treatments" of children. The player noted that he has supported the charity's expenses since the 2014 World Cup and said BigShoe worked alongside German and Swiss doctors to help children around the world by providing life-changing surgeries.

Özil also made donations to Turkey's largest humanitarian organization to feed 16,000 people in need, according to a statement by the Turkish Red Crescent.

Özil's donations covered 1,000 people from 14 different soup kitchens throughout Turkey and 2,000 victims of the Syrian Civil War living in migrant camps in Syria and Turkey.

Dear @MesutOzil1088 I wish you and Amine happiness in 2worlds.Thanks 4 your donation to @Kizilay, we delivered your Wedding Dinner to 16.000 people from our soup kitchens. They thanked you and wished you a lifelong happiness❤️I wish these beauties to be an example for everyone😊 pic.twitter.com/MFbeGSChBB

The charity is active both in Turkey and in the world, reaching out to disadvantaged families suffering from poverty as well as refugees fleeing conflicts.

Özil's donations won the praise of fans on social media. "A player with a big heart!" one Twitter user wrote, while another user wrote "a real hero on and off the pitch."

The 30-year-old Özil, described as one of the best players in the world, earns around 350,000 pounds (approximately $445,869) weekly. His regular work with BigShoe earned him the Laureus Sport For Good award five years ago. Özil also served as an ambassador for Rays of Sunshine, a U.K.-based charity for seriously ill children. In 2014, he donated his World Cup winnings, which amounted to about 240,000 pounds, to pay for 23 Brazilian children to have surgery.

The 30-year-old Arsenal player has reportedly been dating Gülşe, a 26-year-old former Miss Turkey, since 2017. They got engaged in January this year. Özil regularly features in Gülşe's Instagram posts to her 1.9 million followers, the latest a photo of the couple gazing into each other's eyes on the stands of a football stadium on May 29.

That must have been before the match in Baku, Azerbaijan, when Arsenal lost 4-1 to Chelsea in the Europa League, failing to qualify for the coveted Champions League.

Özil is reportedly Arsenal's highest-paid player but hasn't had it easy at the club this year - he's been dropped from the starting line-up, left out of the squad completely and missed numerous games through injury and illness, as questions surfaced about his commitment.

Özil and Gülşe have been in Istanbul in recent days, holding bachelor's parties on Wednesday and traditional henna night for brides- usually performed a day before the wedding - on Thursday night at a hotel in Beşiktaş district. Close friends and relatives of the couple attended the event where Gülşe's hands were painted with henna per tradition and guests danced to folk songs. Videos of the night show Gülşe, dressed in a gold-embroidered red dress dancing with Özil.

Turkish media outlets wide reported that the wedding will take place in the luxury Four Seasons Hotel by the Bosporus with 300 guests attending.

The couple will reportedly spend their honeymoon in their new villa in upscale Aegean resort town of Alaçatı in Çeşme district of Turkey's western Izmir province. Özil bought the land in partnership with Turkish TV mogul Acun Ilıcalı for an undisclosed and spent some 10 million Turkish liras ($1.7 million) for the construction.

The wedding is likely to generate some controversy in Germany. A photo distributed by the office of President Recep Tayyip Erdoğan in March, apparently showing Özil and Gülşe handing him an invitation to their wedding, had sparked criticism.

Özil and Gülşe also attended to an iftar meal hosted by Erdoğan for youngsters and students at the Dolmabahçe Palace in Istanbul on May 18, where they reportedly discussed the details of their wedding with the president. 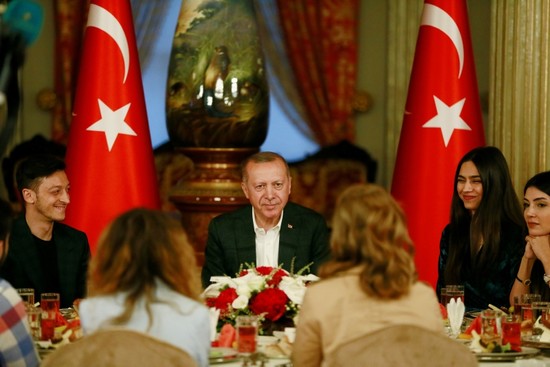 The footballer, who was born in Germany to Turkish parents, had also drawn condemnation last year, when he posed for pictures with Erdoğan in London ahead of elections in Turkey and ahead of the World Cup in Russia.

Reinhard Grindel, the then president of the German Football Association (DFB), said Özil and another Turkish-German player, Manchester City's Ilkay Gündoğan, had been "abused" by Erdoğan's campaign and said that "football and the DFB stand for values that are not observed adequately by Mr Erdoğan." Everton striker Cenk Tosun was also present.

The far-right called for their expulsion from the German team and Özil was booed during pre-World Cup matches, despite scoring. The fallout from the controversy led him to retire from the national team after Germany's World Cup group stage exit.

In a message posted on social media Özil wrote that the picture with Erdoğan "had no political intentions."

"In the eyes of Grindel and his supporters, I am German when we win, but I am an immigrant when we lose," he said.

"This is because despite paying taxes in Germany, donating facilities to German schools and winning the World Cup with Germany in 2014, I am still not accepted into society."

When asked about his attendance at Özil and Gülşe's wedding, a spokesman for Erdoğan this week refused to comment on "the president's movements on Friday," but the president is largely expected to attend the wedding ceremony.

The family of Özil, who was born in Gelsenkirchen, Germany, hails from Zonguldak in northern Turkey.

Share on Facebook Share on Twitter
Previous in Life In the Nusaybin district of Mardin province, a site of great importance... Next in Life Summer is finally here and everyone is looking to enjoy some sea,...
DAILY SABAH RECOMMENDS