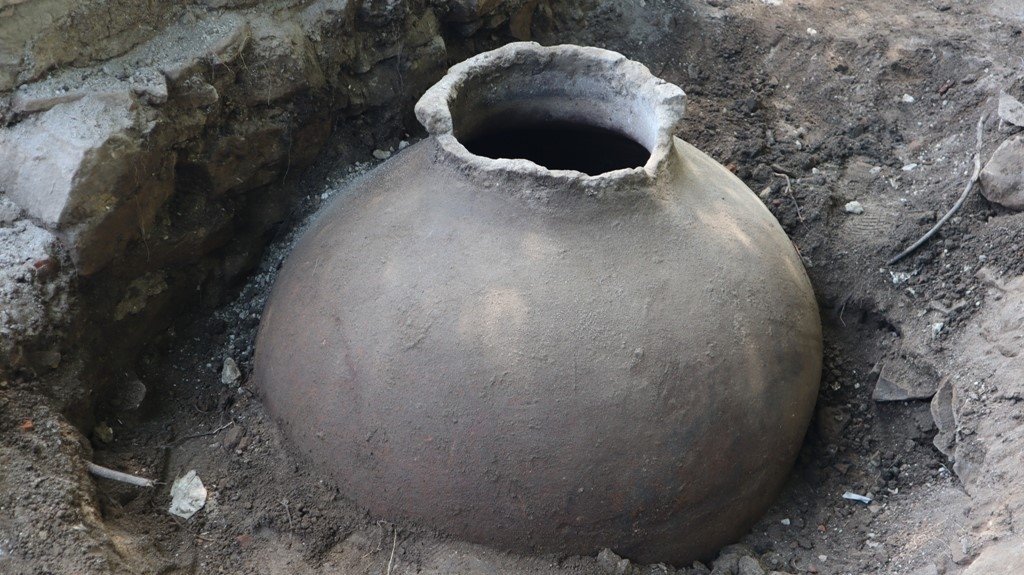 An asymmetrical pithos, or a very large earthenware jar, used for water or grain storage has been found during the excavations carried out in the ancient city of Prusias ad Hypium in the northwestern province of Düzce.

According to a statement by the Düzce Municipality, archaeological digs continue in the ancient city, which is deemed the "Ephesus of the western Black Sea region,” with 60 excavation personnel, six of which are archaeologists.

During the excavations, the head of Medusa, known as the "snake-haired female monster that turns anyone who looks into the eyes into stone" in Greek mythology, and various statue heads, tombs and many artifacts that are thought to belong to the first or second century B.C., have been unearthed to date.

In recent studies, the theater part of the city is being revealed thanks to archaeological digs. As a result of the work, the excavation team concentrated on the upper part of the ancient theater, and an asymmetrical pithos that was probably used for water or grain storage was found next to the late Ottoman-early Republic building foundations. The officials continue to work on removing the pithos as soon as possible to determine which period it belongs to.

The ancient city of Prusias ad Hypium was known as “Hypios” and “Kieros” in earlier periods. It was captured by Prusias I of Bithynia, and the people of Bithynia named the city in honor of their king.

However, Bithynia went bankrupt due to the opulent lifestyle of its citizens. The people of Bithynia bequeathed the kingdom to the Romans, which started the Latin influence on the city. The city was already rich in terms of architecture but flourished more under the Romans. It became known as Prusias ad Hypium.

The city then passed into the hands of the Byzantines and Ottomans, respectively. Under Ottoman rule, it was handed over to Konuralp Bey, one of the first Turkish commanders who served in the establishment of the empire, by Osman Ghazi, the founder of the empire. This is how the region of the city received its current name, Konuralp.