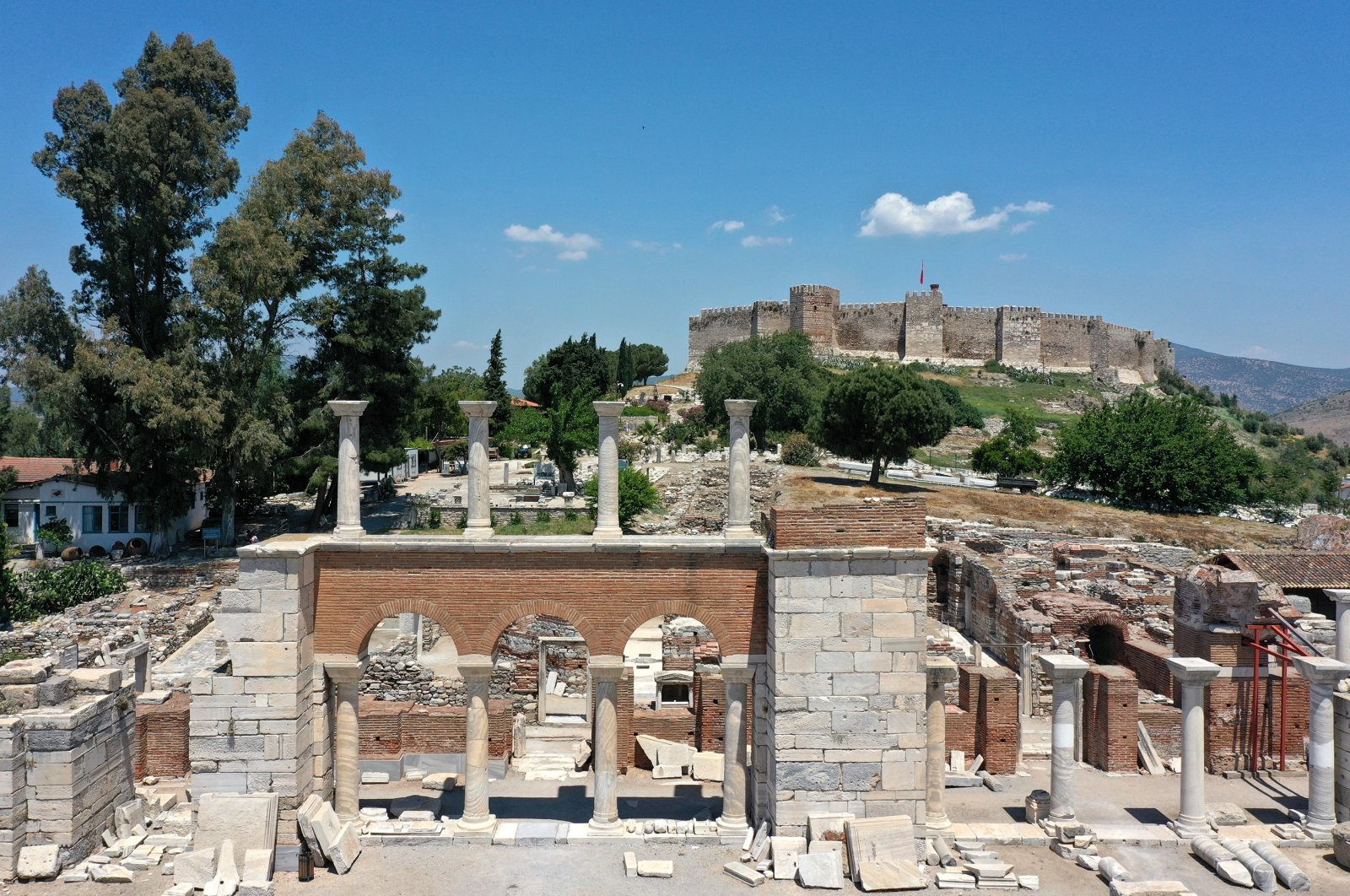 A 3,200-year-old Mycenaean statuette has been found in the ongoing excavations at Ayasuluk Hill in western Izmir province's Selçuk district. The statuette, which reveals a possible connection between Hittites and Mycenaean civilizations in the Ephesus region, could change the perspective on the history of civilization in Western Anatolia during the Bronze Age.

The finds obtained from the excavations on Ayasuluk Hill, which continue with the permission of the Ministry of Culture and Tourism, the support of the Turkish Historical Society (TTK) and the Izmir Metropolitan Municipality, shed light on the history of the region.

During the excavations carried out under the direction of associate professor Sinan Mimaroğlu of Hatay Mustafa Kemal University Art History Department, a Mycenaean figurine with a height and width of about 5 centimeters (1.97 inches), whose head and feet could not be found, was unearthed, as well as ceramics from the Bronze Age.

Twenty-five experts in different disciplines such as art history, anthropology and genetics agreed as a result of the preliminary study that the Mycenaean statuette is strong evidence of a Bronze Age settlement on Ayasuluk Hill.

The statuette also strengthened the idea that Apasa, the capital of the Arzawa – a kingdom affiliated with the Hittites – was founded in the Seljuk and Ephesus regions, and that there was an interaction between the Hittites and Mycenaean civilizations in many areas such as trade.

Speaking to Anadolu Agency (AA), the excavation head Mimaroğlu said that the figurines that are in a similar form to the Mycenaean statuette have been found in five centers in Western Anatolia to date. These centers were Troy, Limantepe, Kadıkalesi, Miletus and Iasos.

Noting that they thought that the Mycenaean figurines were mostly used for worship in tombs or inside houses, Mimaroğlu continued: "The quality of the clay from which such figurines are made generally shows where they came from. According to our first observations, the Mycenaean statuette found here suggests that it may have been imported material, that is, it might have come from the islands. As it was quite expensive to bring materials from abroad, it makes us think that the people of this region also had financial power. We discovered oysters in a particularly well-eaten state, as well. These findings suggest that the upper class could access this food and import goods from abroad. The Mycenaean figure and the oyster shells actually complement each other like pieces of a puzzle."

The Mycenaean statuette dates back to 1200 B.C., according to the excavation head. As the material of this find suggests that it was imported, it also proves that there was a strong Bronze Age settlement in the region. And during the Bronze Age, there were important Hittite centers and settlements in Western Anatolia. Therefore, the statuette leads experts to the idea that Ayasuluk Hill is associated with Apasa, which was the capital city during the Hittite period.

Despite the acceptance of many historians, Mimaroğlu stated that they could not scientifically match Ayasuluk Hill and Apasa without a seal and added, “To be precise, we need to find seals that tell us the region was called Apasa in the past.”

Known as the first settlement in Ephesus, where there has been an uninterrupted settlement for approximately 9,000 years, Ayasuluk Hill is located in the city center of Selçuk, approximately 3 kilometers (1.86 miles) from today’s ancient city of Ephesus.

Ephesus, which was moved to the borders of today's ancient city in the 300s B.C., was destroyed by the closure of the port by the alluvium of the Büyük Menderes River (historically the Maeander), earthquakes and Sassanid raids. It was moved to the region around Ayasuluk again in the seventh century. Selçuk and Ephesus came under Turkish rule with the founding of the Aydınoğulları Principality in 1304.