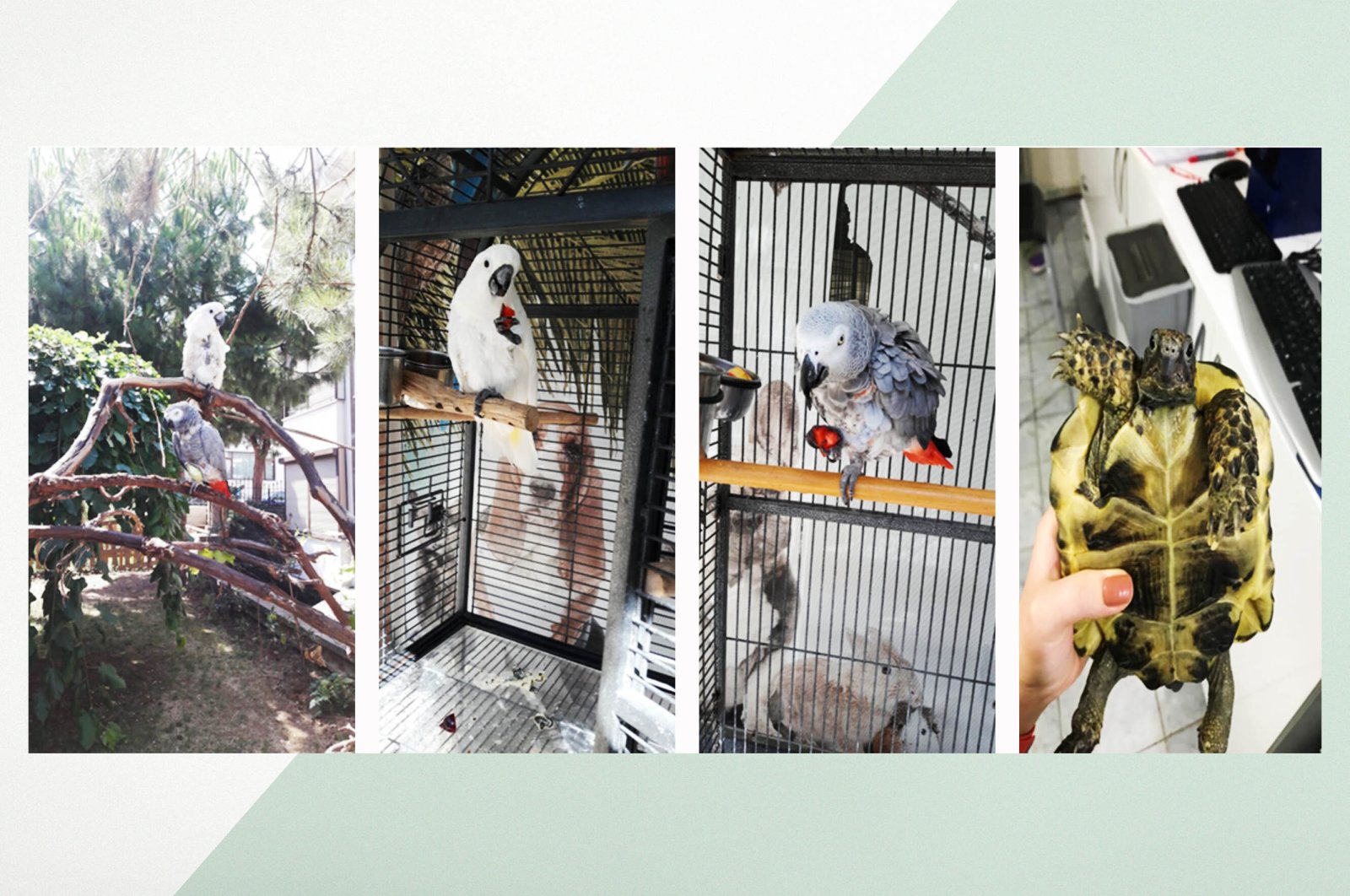 The patients of this hospital are somewhat unusual: sick budgies, cockatoos, cockatiels, parrots, guinea pigs, rabbits and iguanas are being treated meticulously here!

When people decide to have a pet, the majority of them prefer cats and dogs. For this reason, veterinary clinics that can treat our little cats and dogs are increasing day by day all over Istanbul.

But what about those who choose exotic animals as pets? Where should cockatoo, cockatiel or iguana owners seek advice in case of an illness? As an owner of a mischievous female cockatiel, I usually come across the reply, "We do not treat avians" from veterinarians in cases of illnesses.

However, Turkey's first "exotic animal hospital" in Istanbul's Florya district provides all kinds of treatment to exotic animals from budgies to turtles.

When you enter the hospital, two gray African parrots and one white cockatoo named "Zombie" welcome the patients with their whistles, sometimes with Zombie's ear-ringing screams. These three animals were abandoned by their previous owners claiming that they become "ugly" because they were plucking their feathers due to exposure to stress.

Founded in 1996, the clinic was established by Akif Demirel, a graduate of Istanbul University, from the Veterinary Medicine department. Demirel, who was also educated in the United States and Canada, is the first Turkish Veterinarian to hold two veterinary titles in both countries namely Turkey and the U.S. He is also Turkey's representative of the Association of Avian Veterinarians European Committee.

Having graduated from the same university, Filiz Demirel, who worked with her husband at Northern Veterinary Hospital In Iroquois Falls in Canada for eight years before the clinic was opened, is the other founder of the clinic.

Mainly, exotic avians are treated in this clinic. Apart from that, guinea pigs, hamsters, tortoises, iguanas and rabbits are other patients. The necessary laboratory procedures are also carried out in this exotic animal hospital. All processes such as gaster, fecal analysis, X-ray screening, blood tests, biochemistry and surgical procedures can be performed. They also have a section for in-patients.

The clinical team is quite open to providing data to the pet owners as long as the recovery steps are followed correctly, thus saving the lives of the animals. In cases when the wrong diagnosis brings the animals to the last stage of a disease, they give a hundred and ten percent effort to save the little ones' lives.

Speaking to Daily Sabah, Merve Siirtli, one of the veterinarians of the clinic stated that budgies make up most of their patients with 70%. This estimate is followed by Jaco parrots and cockatiels.

"These birds, whose homeland is usually Australia, are wild animals living in natural environments such as doves and crows in Turkey. However, they are illegally brought to different countries and produced in unsanitary conditions," Siirtli said.

Emphasizing its commercialization, "This cycle cannot be stopped because of purchases and requests. We try to help these little ones with diseases as much as we can," Siirtli added.

"They are free-living by nature. Yet, somehow they can adapt to the home environment. The most important factor to be considered while taking care of them at home is nutrition. Contrary to popular belief, their diet should not be based on seeds. Like humans, they need a diversity of food as they are fed in nature for their healthy development. Avians who only eat seeds are likely to get sick in the long run. Seventy percent of their diet should consist of pellets while the other nutritions should be taken from vegetables and fruits," she said.

We are a society accustomed to crumbling bread when we come across a bird. However, Siirtli stated that bread is one of the most harmful foods for birds as it contains yeast. It is even dangerous for humans. "These animals should not be fed with yeasted products," she added.

On the other hand, some people who wish to own a bird or are already owners tend to see these animals as decorations after putting them in a cage. Birds are not cage animals their food and water can be given from time to time. From the smallest to the biggest, these are intelligent animals that crave communication, attention and care, as much as a cat or a dog. For instance, I adopted my cockatiel after I saw her in a cage, and locked it in an office room. When I saw how excited she was when I entered the room, I couldn't bear to leave such beauty alone and neglected. Now we have bonded so much with the naughty girl, who's never been in a cage, that if I leave the room she's in for a minute, she will shout for me or fly up to me.

"If an animal is to be adopted, the pet owner's life should be adapted accordingly," Siirtli added.

Sevinç Dilara Taşkıran, a veterinary technician at the clinic also emphasized the importance of nutrition in avians and the environment they live.

"These animals do not consume carbohydrates in nature, they corrode trees. They are aware of their food cycle and able to distinguish poisonous plants. However, they tend to eat ornamental plants at home due to the craving for greens, in search of greenery at home, they cannot find a basil leaf or an apple tree, so they eat whatever they find. Therefore, Liliaceae and orchids should be kept apart from birds. Recently, one of our patients faced organ failure due to the orchid plant it ate. These plants can acutely affect their metabolism and cause death," Taşkıran said.

"There was no specific aim to found an exotic animal clinic. However, veterinary clinics in Turkey provide training only for geese, chickens and roosters in terms of avians. However, Dr. Akif Demirel's experience in the U.S. and Canada turned into an advantage for us. Then people started to wonder 'Where to take my sick bird, rodent?' and the name of our clinic started to be heard. Since then, we turned into an exotic animal hospital," she said.

"Of course, we also treat cats and dogs, but I can say that the fact that other veterinarians did not provide the right treatment for these animals encouraged us to focus on exotic animals in particular," she added.

The clinic provides treatment services to its patients by appointment. The inspection process, which consists of special care, takes a minimum of one hour. The treatment of these animals is carried out meticulously, as physical examination and making the correct diagnosis according to the analyzes require thinking and time. According to the type of sickness and weight of the animal, the clinic prescribes specific medicines in terms of the level of the active substance.

"People are generally informed about the use of unnecessary antibiotics. This also applies to exotic animals. In veterinary clinics, medicines should not be prescribed to these animals without testing. A simple fecal analysis often shows the distress in the animal. Otherwise, the medication given without testing will lead to the failure of the kidneys and livers of exotics,” she said.

"The medication used for exotics is limited. Therefore, exotic animal owners must be go-to specialists in this field. The same applies to these animals, as we make an appointment to the relevant specialty when we are sick. Medicines used in cats and dogs cannot be used in birds. Our little friends die from cortisone poisoning," she added.

Merve Siirtli also stated that the most common disease in birds is drying disease (megabacterial infection). "This disease, which is usually seen in birds raised in petshop environments, is 90-95% contagious and one of the most deadly diseases. It is very difficult to treat," she said.

The number of abandoned animals is increasing. For this reason, I asked our doctors the reasons why these animals were abandoned.

"In Turkey, veterinary medicine began to progress in a patient-material relationship. 'I can't afford to look after my pet' people sometimes say. Material concerns leave behind a moral compass. At the same time, our equipment reaches us on a dollar, and euro basis. Our materials are also affected by prices. Whatever happens, we should not abandon these little ones, just as we do not leave our sick child." Siirtli said.

On the other hand, veterinary technician Taşkıran touches on the visual pleasure aspect of this issue. "When parrots are separated from nature and enter the cage environment, they get stressed. As a result of this stress, feather plucking can be observed in the birds. We have heard statements from some people who leave their animals here, such as pulling their feathers and getting very ugly. It has turned into a situation like a child getting bored with a toy," she said.

Birds are generally animals that can hide their illness very well to appear strong in the flock and not be expelled. Pet owners may not realize that they are sick for a long time. Only in the last stage, when the bird becomes ill, the disease condition can be noticed. For this reason, having routine check-ups is very important for them to lead a healthy and quality life. Even if a 100% correct diagnosis and treatment are offered in the clinic, recovery develops depending on the animal's response.

I think that those who want to adopt a bird should seriously consider all these factors. Otherwise, it is very difficult for these animals to lead a healthy life after being plucked from their natural habitat.