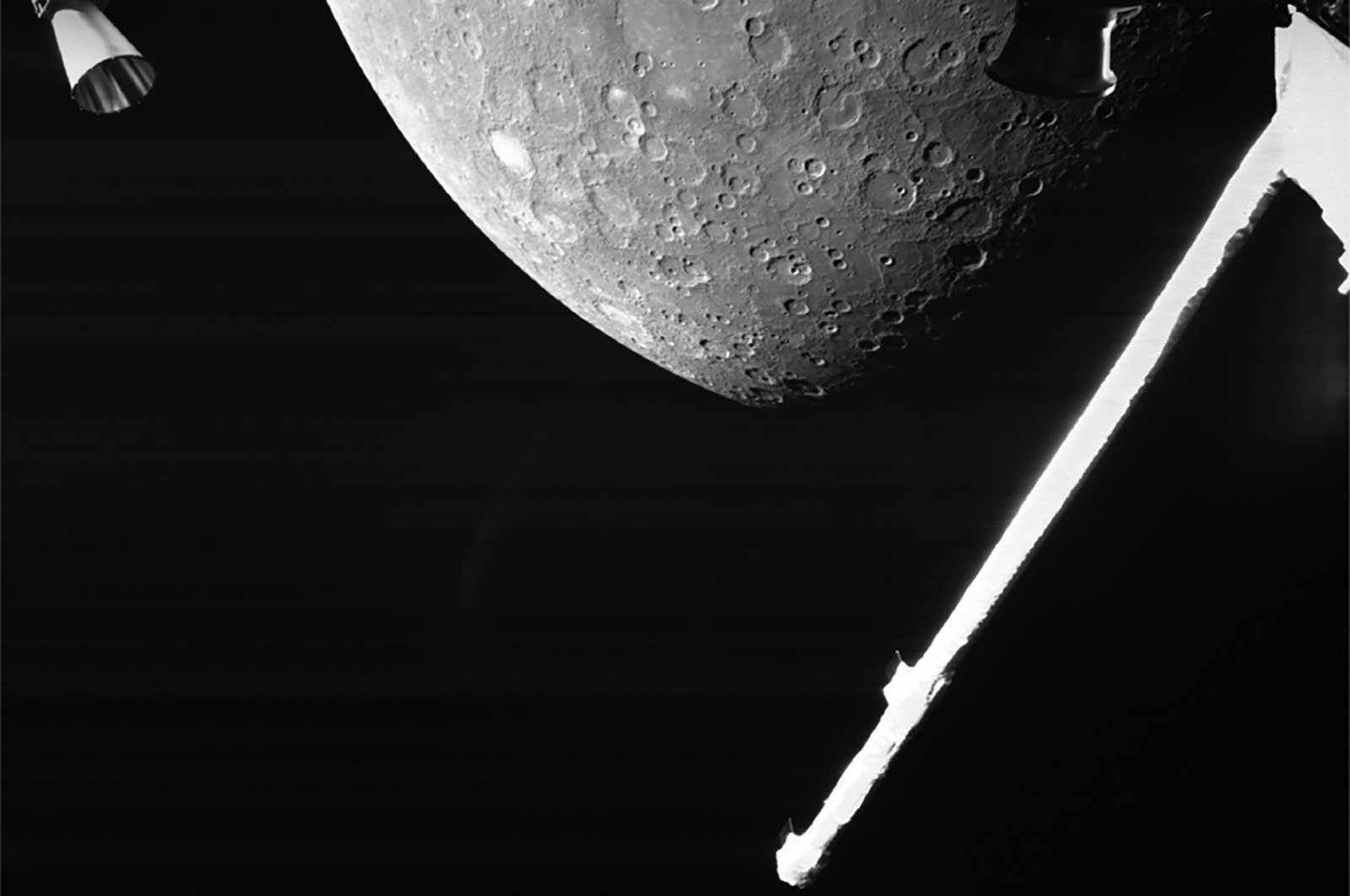 A handout photo by the European Space Agency shows a view of Mercury captured by the joint European-Japanese BepiColombo mission as the spacecraft flew past the planet for a gravity assist manoeuvre, Oct. 1, 2021. (ESA via AP)
by French Press Agency - AFP
Oct 03, 2021 6:32 pm

A joint European-Japanese spacecraft, called BepiColombo, provided its first glimpse of Mercury on its first flight around the planet nearest to the sun – testing the waters before delivering two probes into orbit in 2025 – the European Space Agency (ESA) said Saturday.

The images were obtained almost three years after the unmanned mission vessel was launched aboard an Ariane 5 Rocket.

The cameras attached the BepiColombo provided black-and-white images, the ESA said in a statement.

But as the spacecraft arrived on the night side of the planet, conditions were "not ideal" for taking images at its closest approach to the planet, an altitude of 199 kilometers (124 miles), so the closest was from about 1,000 kilometers.

The region shown is part of Mercury's northern hemisphere, including large craters and an area flooded by lava billions of years ago.

"The flyby was flawless from the spacecraft point of view, and it's incredible to finally see our target planet," said Elsa Montagnon, spacecraft operations manager for the mission.

The BepiColombo mission will study all aspects of this mysterious inner planet from its core to surface processes, magnetic field and exosphere, "to better understand the origin and evolution of a planet close to its parent star," said the agency.

Mercury is also the only rocky planet orbiting the sun besides our own to have a magnetic field.

Magnetic fields are generated by a liquid core but given its size, Mercury's should have grown cold and solid by now, as Mars did.

This anomaly might be due to some feature of the core's composition, something BepiColombo's instruments will measure with much greater precision than has been possible so far.

On its surface, Mercury is a planet of extremes, vacillating between hot days of about 430 degrees Celsius (more than 800 degrees Fahrenheit) to super-frosty nights of minus 180 degrees Celcius.

Those days and nights last nearly three Earth months each.

Earlier missions have detected evidence of ice in the deepest recesses of the planet's polar craters.

Scientists speculate that this may have accumulated from comets crashing onto Mercury's surface.

BepiColombo is due to make five more flybys of Mercury during a complex trajectory that will also see the satellite fly past Venus and Earth.

It could not be sent directly to Mercury, as the sun's pull is so strong that a huge braking manoeuvre would be needed to place the satellite successfully, requiring too much fuel for a spacecraft of this size. The mission will last for around another five years.

The gravity exerted by the Earth and Venus – known as gravitational assist – allows it to slow down "naturally" during its journey.