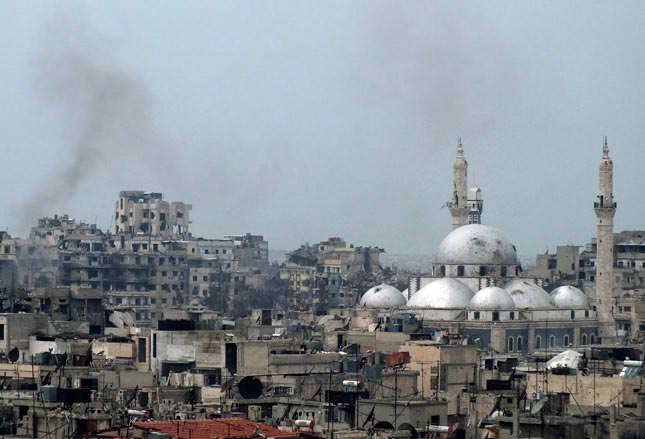 by AA Mar 11, 2014 12:00 am
Damascus - Syrian government forces, which have been besieging opposition cities and turning them into rubble, are using starvation as a weapon of war, Amnesty International said yesterday in a report. Amnesty's Middle East director Philip Luther said, "The harrowing accounts of families having to resort to eating cats and dogs, and civilians attacked by snipers as they forage for food, have become all too familiar."

Syrian forces are committing war crimes by using "starvation of civilians as a weapon of war," said a report by the the human rights group Amnesty International.

At least 128 individuals have starved to death at the Yarmouk camp, on the outskirts of Damascus since the siege was tightened in July 2013 and access to crucial food and medical supplies was cut off. "Life in Yarmouk has grown increasingly unbearable for desperate civilians who find themselves starving and trapped in a downward cycle of suffering with no means of escape," said Philip Luther, Director of the Middle East and North Africa Program at Amnesty International. "Civilians of Yarmouk are being treated like pawns in a deadly game in which they have no control." Around 17,000-20,000 Palestinian and Syrian refugees live in the Yarmouk camp. The report says that government forces and their allies have repeatedly carried out attacks, including air raids and shelling with heavy weapons, on civilian buildings such as schools, hospitals and a mosque in Yarmouk. Doctors and medical staff have also been targeted. At least 60 per cent of those remaining in Yarmouk are said to be suffering from malnutrition, according to the report.

Residents told Amnesty International they had not eaten fruit or vegetables for many months and prices have skyrocketed with a kilo of rice costing up to $100. "Syrian forces are committing war crimes by using starvation of civilians as a weapon of war. The harrowing accounts of families having to resort to eating cats and dogs, and civilians attacked by snipers as they forage for food, have become all too familiar details of the horror story that has materialized in Yarmouk," said Luther. The camp has also had its electricity power supply cut since April 2013.

Luther called on both the Syrian government and the opposition to refrain from attacks on medical and other humanitarian workers. "The siege of Yarmouk amounts to collective punishment of the civilian population. The Syrian government must end its siege immediately and allow humanitarian agencies unfettered access to assist suffering civilians," Luther added.