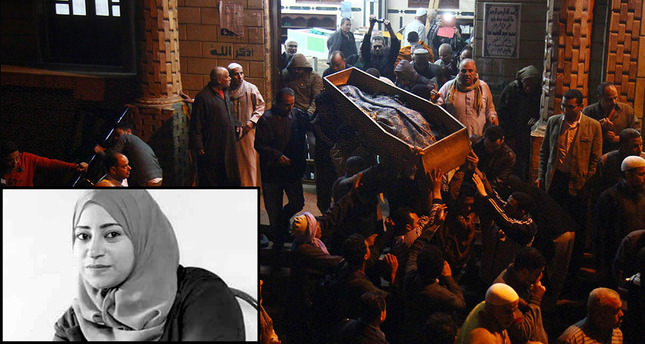 by AA Mar 29, 2014 12:00 am
SHEBIN AL-KOM, Egypt — An Egyptian journalist killed on Friday while covering demonstrations by pro-democracy protesters in eastern Cairo has been laid to rest in the Nile Delta province of Menoufiya.

Hundreds of people participated in the Saturday funeral of Mayada Ashraf, 23, a field reporter for the Arabic language newspaper Al-Dostor and Masr al-Arabia news website.

The mourners included journalists, some of whom accused policemen of killing their colleague and demanded a fair investigation into her killing.

Mayada's father, for his part, did not blame anybody for his daughter's death, but only kept murmuring words of consolation.

On Friday, the Interior Ministry accused the Muslim Brotherhood, the movement from which ousted president Mohamed Morsi hails, of responsibility for the killing of five people, including Ashraf.


However, the pro-democracy National Alliance for the Defense of Legitimacy, which backs Morsi, said policemen opened fire at the demonstrators in Ain Shams, killing five people, including Ashraf and a Christian resident of the district.

Morsi supporters protested in several parts of Egypt on Friday against a Wednesday announcement by former army chief Abdel-Fattah al-Sisi that he planned to run for president in upcoming polls.

Al-Sisi is widely seen as the driving force behind Morsi's ouster by the army last summer.

In the almost nine months since Morsi's removal from office and subsequent imprisonment, his supporters have been staging rallies on an almost daily basis to denounce what they describe as the July 3 "military coup" against Egypt's first freely elected president.