At least two killed in attack on opera house 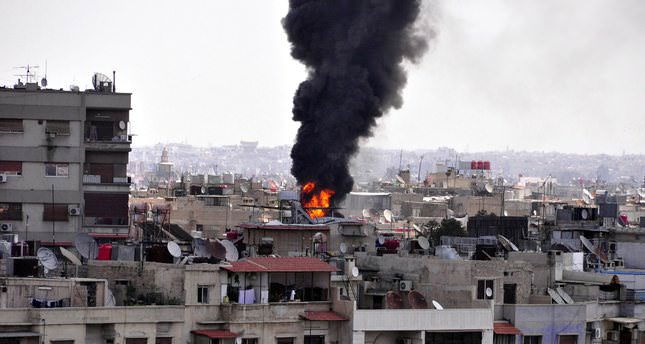 A mortar attack on the Damascus Opera House killed two people, state media reported, as regime forces pressed a campaign against rebels on the Syrian capital's outskirts. The attack damaged the Opera House, which was inaugurated by President Bashar Assad in 2004

DAMASCUS — Mortar shells exploded near the Damascus Opera House yesterday, killing two. The opera, officially called the Assad House for Culture and Arts, is located near a cluster of government and security buildings and last year hosted a defiant speech by President Bashar al-Assad in which he vowed to continue fighting rebels seeking his overthrow.

Rebels holed up in the city's rural periphery have focused their efforts on hitting the area, said an activist who uses the name Muaz al-Shami.

Last week government forces seized the outskirts of the town of Mleiha, near the region of Ghouta. That came after pro-Assad forces severed important rebel supply lines from the eastern Lebanese border into the Damascus periphery.

Meanwhile, Jordanian officials say bloody riots have erupted at the largest camp for Syrian refugees, leaving at least one refugee dead and 31 people wounded on Saturday.

They said scores of refugees in the sprawling camp close to the Syrian border were injured as baton-wielding anti-riot police used tear gas to disperse stone-throwing refugees who set fire to official offices and caravans. Jordanian police blamed "agitators" who were apprehended after trying to flee the refugee camp of nearly 70,000 residents.

Authorities said at least 22 anti-riot police were hospitalized for treatment but denied any deaths occurred.

Residents say the rioting, the first such serious disturbance this year, was provoked when a Jordanian security officer ran over with his car and seriously injured a fouryear old Syrian child, prompting outrage by residents and relatives protesting ill treatment.

The camp has witnessed almost daily protests over living conditions when it was first set up nearly two years ago but protests have since dwindled as U.N. agencies stepped up improvements in its infrastructure and services.

The U.N. says 2.5 million Syria refugees have been registered in total, more than 10 percent of Syria's population. Jordan hosts at least 600,000 refugees with the rest mainly in Lebanon and Turkey.

On Saturday, at least 118 people were killed in alleged attacks by the Syrian regime against opposition forces Saturday, according to a London-based rights group.

Thirty-two people were killed in the suburbs of Damascus, 22 in Aleppo, 19 in Idlib, 14 in Daraa, 13 in Homs, 11 in Hama, four in Deir ez-Zor and one each in Kuneytra, Tartus and Latakia, according to the Syrian Network for Human Rights. Meanwhile, the Local Coordination Committees of Syria reported that the regime air force staged air attacks with helicopters on the oppositioncontrolled areas in Aleppo, where many buildings were either damaged or destroyed.