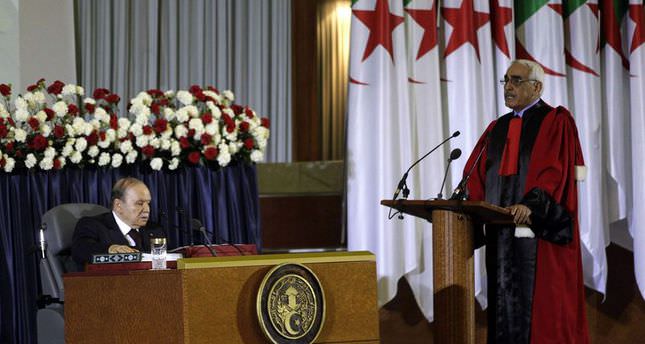 by AA Apr 28, 2014 12:00 am
ALGIERS — Algerian President Abdelaziz Bouteflika on Monday was sworn in for a fourth five-year term after winning the presidential election earlier this month.

During the ceremony aired by state television, the 77-year-old was shown taking the oath while sitting in a wheelchair, having not totally convalesced from a health problem he suffered in April 2013.

The ceremony held at a presidential palace in western Algiers was attended by a large number of senior government officials along with former presidential hopeful Louisa Hanoune, the head of Algeria's Workers' Party.

Bouteflika's main rival in the presidential election and former prime minister Ali Benflis did not show up at the ceremony.

Benlfis has already questioned the results of the presidential election, saying the vote was rigged in Bouteflika's favor.

After he took the oath, the Algerian president delivered a brief speech in which he thanked the people who voted for him in the election as well as his presidential rivals.