Leader of Muslim Brotherhood hits out at death sentence 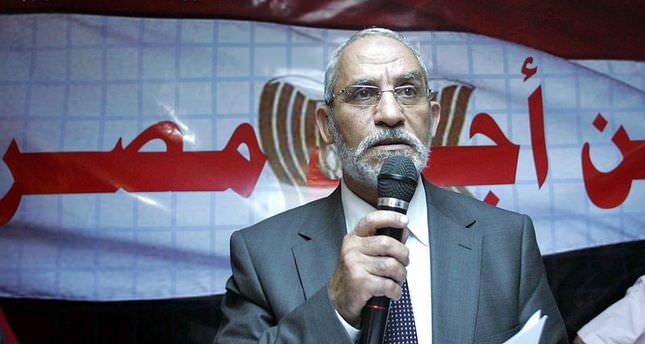 by May 01, 2014 12:00 am
CAIRO — The leader of Egypt's Muslim Brotherhood criticized yesterday a death sentence handed to him and 682 others, defiantly insisting the "coup" that toppled president Mohamed Morsi will be defeated.

Mohamed Badie made the comments about Monday's sentencing from the caged dock at another trial in which he, Morsi and others are accused of plotting attacks and prison breaks.

Since Morsi's overthrow by the military in July, the armyinstalled government has conducted an extensive crackdown that has left at least 1,400 people dead and thousands in prison.

The mass death sentences, the second in as many months, sparked global outrage, with the United States urging the government to reverse the judgment. "I did not attend this trial, and I along with 1,000 others have been condemned to death," said Badie of this week's sentencing, which took place in his absence. "The coup will end," he said.

Morsi, who often tries to interrupt court proceedings with speeches, added: "this farce will end."Morsi faces three trials, all of which can lead to the death sentence. Much of the leadership of his Brotherhood movement has been arrested and placed on trial.

In Monday's sentencing, the 683 defendants were convicted of the murder and attempted murder of policemen during riots in the southern province of Minya.

The same judge had sentenced 529 people to death on similar charges in March, but later commuted the sentences
of most to life in prison.