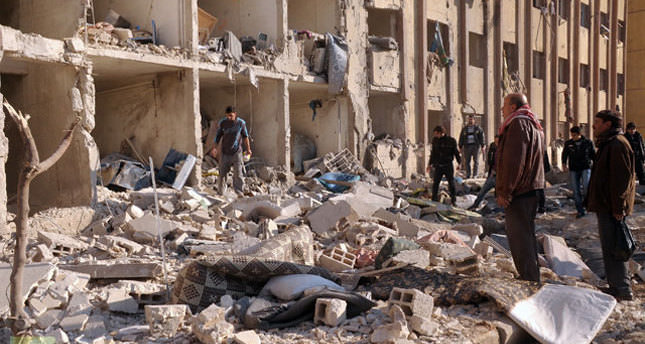 The battle for Syria's largest city has taken on new urgency as President Bashar Assad's forces have seized the momentum with the fall of Homs and other areas around the capital, Damascus. Aleppo has been carved up into opposition- and government-held areas since the rebels launched an offensive there in July 2012, capturing territory along Syria's northern border with Turkey.

The agency said the attack was carried out by "terrorists," the term the government uses to refer to rebels. It said the shells also damaged two houses in the area.

The Britain-based Syrian Observatory for Human Rights, which has a network of activists around the country, said the Achrafieh attack killed 10 people including three children.

The attack came a day after similar shelling on the neighborhood killed three people and wounded 20.

Rocket attacks are common on residential neighborhood around Syria. The rockets can be wildly inaccurate.

The rocket attack came shortly before a car bomb exploded outside a mosque in the northwestern town of Binnish, killing at least eight people, the Observatory reported. It also said the death toll is likely to rise because of several of the dozens wounded are in critical conditions. The Observatory has been documenting the war by relying on information from activists on the ground

An activist in the area who goes by the name of Mohammed Kanaan said the blast occurred as worshippers attended Friday prayers at the Grand Mosque. The Local Coordination Committees, another opposition group, said the car bomb killed several people and wounded dozens more.

An amateur video posted online by activists showed several vehicles on fire just outside a mosque. Black smoke billowed from the area as people rushed to help.

The video appeared genuine and matched Associated Press reporting of the event.

Meanwhile, government forces continued to pound opposition areas around the capital, Damascus, including the town of Daraya southwest of the city, and Mleiha and Babila to the east. Videos posted online showed a massive barrel bomb slamming near a mosque in Daraya, sending a huge cloud of smoke billowing into the sky.

For weeks, government helicopters have conducted a brutal barrel bomb campaign to a devastating effect, pounding the capital's sprawling suburbs with large containers packed with fuel, explosives and scraps of metal.

Activists say Syria's 3-year-old conflict has killed more than 150,000 people. More than 2.5 million people have fled Syria to neighboring countries, while millions more are displaced within the war-ravaged country.