Obama to up Syria's military assistance 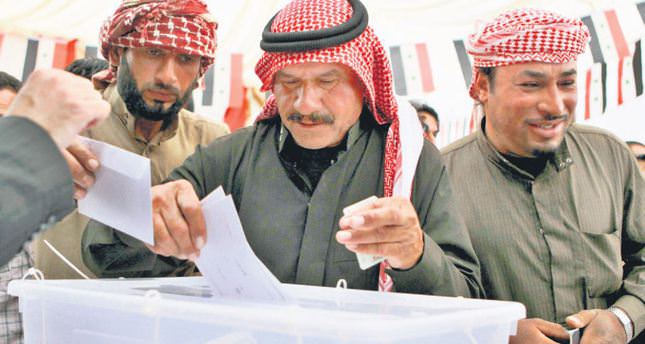 by Daily Sabah May 29, 2014 12:00 am
WASHINGTON, D.C. — Obama announced a new military training program as part of its plans to expand military assistance to Syrian opposition to challenge counterterrorism, thereby strengthening the rebels' hand to oust al-Assad, the prospective winner of the June 3 election.

The United States is set to sign off on a project to train moderate Syrian opposition to fight President Assad regime and al Qaeda-linked groups, although the U.S. State Department has not made a clear statement on this significant issue yet. It is widely believed that this move would lead the U.S. to play a significant role in the Syrian crisis. The leading figures behind this move to create the new military training program to challenge Assad and his allies are thought to be the U.S. ambassador to the United Nations, Samantha Power, and Secretary of State John Kerry, the Wall Street Journal reported.

According to the latest reports, under the new program, Washington would send a limited number of American troops to Jordan to be part of a regional training mission that would instruct Syrian opposition groups on tactics, including counterterrorism operations.

However, no details have been provided concerning the proposed military training program with regard to how and where that training would be done. Its potential risks have been discussed by administration officials.

In a speech at the U.S. Military Academy on Wednesday, Obama underscored the situation in Syria, saying that they will continue "to ramp up support for those in the Syrian opposition who offer the best alternative to terrorists and a brutal dictator." With respect to Obama's speech, this can prove that U.S. would likely to expand its assistance to the opposition, although he did not offer any further details on the alleged military programme. In addition, the Senate Armed Services Committee has authorized the Defense Department to provide training and equipment for moderate Syrian opposition groups, AP reported last week.

Taking the daily press briefing on May 27 into consideration, State Department spokeswoman Jen Psaki on Tuesday stressed that the situation in Syria is a counterterrorism challenge, stating that they have been considering supporting moderate rebel groups. "The current policy approach continues to be strengthening the moderate opposition, which offers an alternative to the brutal Assad regime and the more extremist elements within the opposition," said Psaki, while refusing to comment on the proposed military training program.
U.S. efforts to reinforce the opposition's hand with additional measures have been appreciated by the Syria opposition. The new program would be welcomed by Syrian opposition leaders, as it is expected to strengthen their hand in the fight against the Assad regime.
Opposition leaders have long been lobbying the U.S. to provide lethal assistance to moderate rebel fighters, including antiaircraft missile launchers to fight against Assad's forces.

Apart from the new military-led training program, Obama had authorized sending weapons to Syrian opposition in June 2013. Halit Hoca, Turkey's representative to the Syrian National Council, stressed the necessity of military assistance to rebel groups, as there have been "no weapons to use in [their] hands against the Syrian army." This could prove the U.S. is concerned over weapons ending up in the hands of extremist rebels. The United States announced in early May that the representative offices of the Syrian National Coalition in Washington and New York had gained recognition as "foreign missions" under U.S. law. It also announced a plan for a $27 million increase in non-lethal support to the opposition, which would increase the total U.S. assistance in nonlethal aid in the civil war to around $287 million. In addition, the U.S. has sent a significant number of troops to Jordan for a military exercise. Reports indicate that 1,500 military troops are currently in Jordan, in addition to the approximately 6,000 that arrived there to participate in the annual Eager Lion military exercise. Eager Lion 2014 includes members of the Army, Navy, Air Force and Marines, as well as U.S. ships and aircraft. Reports indicate that U.S. special operations forces have already been to the region to conduct military exercises to give assistance to Iraqi and Jordanian commandos to fight against Assad's forces and al-Qaida-linked and inspired extremists groups.

Despite the brutal escalation of the Syrian crisis, President Assad shows no signs of letting up, as the presidential elections in Syria are to be held on June 3 amid the systematic torture of Syrian opposition members. It is widely believed that Assad would hold the elections to secure a third seven-year term in office no matter what it takes. Syrians living inside Syria are due to vote on June 3. The election would only be held in regions under government forces' control. Therefore, many rebel groups would not be able to cast their votes.

However, Syrian refugees and expatriates started to cast their vote on Wednesday in Syrian embassies in their countries of residence.
The Daily Star in Lebanon reported that as polls opened, many Syrian expats headed to the polls to cast their votes. In addition to Lebanon, the main polling station in the Syrian embassy in Amman opened on Wednesday.

According to reports, more than 160,000 people are believed to have died, and 2.8 million Syrian refugees have fled to neighboring countries since the uprisings started in March 2011.
Last Update: May 29, 2014 1:04 am
RELATED TOPICS