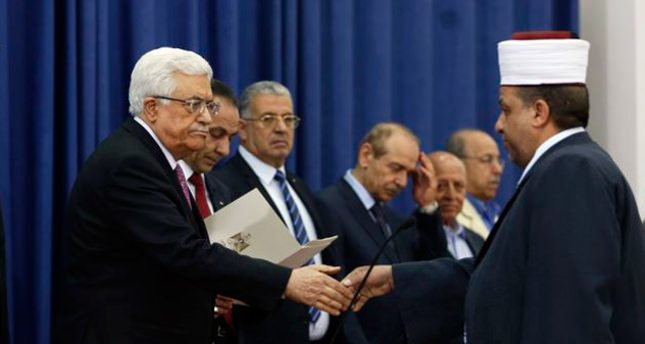 by Anadolu Agency Jun 02, 2014 12:00 am
RAMALLAH — Ministers in the new administration, whom Abbas has said would be politically unaffiliated, took the oath of office in a televised ceremony in Ramallah, the Palestinian seat of government in the Israeli-occupied West Bank. Three ministers from the Hamas-run Gaza Strip were denied entry to the West Bank by Israel.

Abbas, who heads the mainstream Fatah movement, has said the 17-member cabinet would be comprised of unaffiliated ministers and that it would strive to pursue peace.

"Today and after announcing the government of national unity we declare the end of division that caused catastrophic harm to our cause," Abbas said.

At the inauguration ceremony, Abbas said the new government would abide by commitments made by previous Palestinian administrations and by agreements ratified by the umbrella Palestine Liberation Organization, a reference to interim accords with Israel.

A last-minute hitch in the formation of a Palestinian unity government was resolved on Monday, a Hamas official said before the oath.

Hamas had announced that it would not support the new administration because of a decision by Abbas to scrap the Ministry for Prisoner Affairs and replace it with a committee that would have fallen outside the control of the cabinet.

A Palestinian official said Abbas wanted to close the ministry to secure continued Western funds for the government, with some international donors warning they would not support an administration that finances Palestinians jailed in Israel.

The Palestinian government pays monthly salaries to the families of the prisoners. Israel says this encourages attacks against its security forces, and has condemned donors whose aid helps cover such handouts.

Israel has urged the United States and Europe to shun any unity government supported by Hamas, regardless of whether the prisoners' ministry survives.

On Sunday, U.S. Secretary of State John Kerry, who spearheaded the peace efforts that collapsed when the unity deal was signed in April, spoke by telephone with Abbas and voiced his concern about Hamas's role in the government, State Department spokeswoman Jen Psaki said.