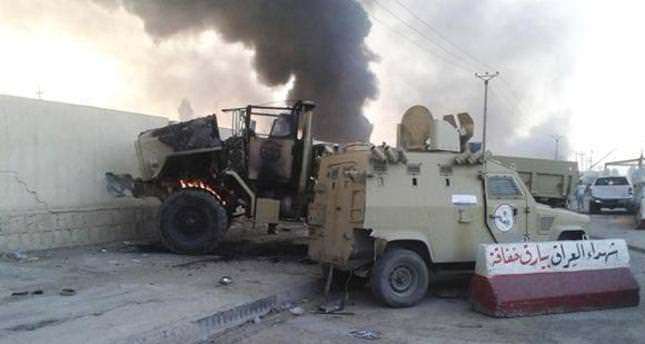 Iraqi citizens concerned about injustice and corruption in the country organized peaceful demonstrations, as government forces cracked down with bombs amid bullets

Since Nouri al-Maliki took over in 2006 as the prime minister, his efforts to sideline Sunnis has alienated a large segment of the society and allowed ISIL to build up its power base and strike at the heart of Iraq's unity and regional stability.

Iraq, ruled by Saddam Hussein's Baath Party regime from 1979 to 2003, was invaded by a U.S. and U.K.-led military force on March 20, 2003, based on allegations that Saddam had weapons of mass destruction (WMD) and threatened peace in the Middle East. In addition to the fact that those forces could not find WMDs, their intervention in Iraq caused political and social instability which led to widespread instability. Iraq is now faced with the social volcanic eruption, which boiled inside for more than a decade, say analysts.

After the invasion, Iraq's state structure and institutions were completely removed under the allies' "de-ba'athification" policy aiming to displace old regime's officials and security forces. Establishing a peaceful and stable environment in a country of which all institutions removed and composed of various ethnic and religious parts with different agendas, has proven to be a difficult task to achieve for both the allies and Iraqi governments. The failure of governments founded after the general elections held in 2005, 2006, 2010 and 2014 have proven analysts right.

Shia coaliations had the right to form a government following elections in 2005 which were criticized by some for being unfair and subject to a low turnout. Some 58 percent of voters (8.5 million out of 14 million) participated in the vote in 2005 and, 62 percent in 2010 (10 million out of 19 million) took part. In 2014, 60 percent of the voters participated (12 million out of 20 million) while about 2 million Sunni people have been exiled from the country without right for vote.

Analysts say that while current Iraqi Prime Minister Nouri al-Maliki, first took his post in 2006 and included some Sunni politicians in his governments or lead them to get high positions, but did not let them act efficently . Former Iraqi Vice President Tariq al-Hashimi is a well-known figure who occupied a high position with no real authority. According to the Iraqi politicians in exile, Maliki, the leader of the Dawah Party which has been holding the leadership position of State and Law Coalition in the power in Iraq since 2006 , has adopted sectarian policies through which he economically and politcally boosted his close Shi'a circle. In addition to Maliki's paramilitary groups' arbitrary arrests, prison sentences have become a daily life reality , an Iraqi researcher told Daily Sabah. "In general, Sunni efficient people like tribe leaders, sheiks and Islamic lecturers have been the target of lawless operations of Maliki forces," the researcher said.

Iraqi citizens concerned about injustice and corruption in the country started to organize peaceful demonstrations in Al-Anbar, Baghdad, Saladin, Diyala, Kirkuk and Mosul. "During the demonstrations protesters raised their voice against Maliki's secterian policies and his close circle's corruptions. However, Maliki viewed the peaceful demostrations as a declare for war and ignited martial operations caused to the death of hundrends of Iraqi people.

An Iraqi journalist Mostafa Kamil told Daily Sabah that armed Sunni-Iraqi tribes, whose members have been conducting operations against the allies' forces since the early days of invasion in 2003, decided to resist Maliki's force with martial retaliation. According to social media, those armed forces made countless military operations both against allies and Maliki's forces on a daily basis, which means they are capable of taking large martial actions.

In addition to the native tribes' forces, Islamic State in Iraq and the Levant (ISIL), an armed Islamic group, which is considered as extremist jihadists, has become a part of martial operations against the Maliki government.

According to al-Hashimi, there is no agreement fixed between said parties. "But I am sure there is a mutual understanding for coordination to put an end for the Sunni tragedy in there," al-Hashimi told Daily Sabah.

Commenting on the issue, lecturer at Istanbul University Iraqi scholar Dr. Abdulhamid el- Ani noted that native Iraqi tribes who emphasize the unity of Iraq will be able to finalize their salvation movement without letting any group divert it to something else. Iraqi journalist and author Haris el-Ezdi made statements to Anadolu Agency regarding the latest developments in Iraq. He noted that ISIL does not control the area as much as international media shows. "Iraqi tribes are holding the critical points in cities like Mosul, Tikrit and Samarra and have no intention to leave their front without assuring the safety of the citizens," he concluded.
RELATED TOPICS