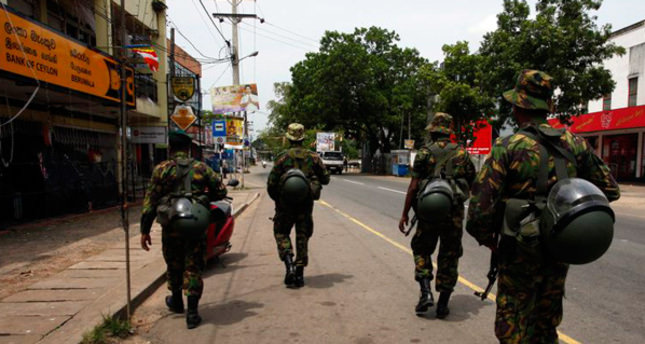 by AA Jun 19, 2014 12:00 am
A prominent Buddhist monk known for actively speaking out against hardline Buddhist nationalists in Sri Lanka has been assaulted and was found with cut wounds, police said Thursday.

Police spokesperson SSP Ajith Rohana said Vataraka Vijitha Thero was taken to hospital in western Sri Lanka early Thursday. Thero is known for raising his voice against the Sinhalese Buddhist nationalist group Bodu Bala Sena and their use of hate speech against minorities.

Bodu Bala Sena's General-Secretary Galagodatthe Gnanasara recently stormed into a media conference being addressed by Thero and, face-to-face, threatened him.

A Bodu Bala Sena rally in southwestern town Aluthgama descended into communal clashes on Sunday when they tried to march through predominantly Muslim areas. Eyewitnesses said Muslim-owned shops were set alight and mosques vandalized, forcing many -- especially women and children -- into hiding.

Following the clashes, the Muslim's Rights Protection Organisation in Sri Lanka have called for a strike on Thursday and Muslims businesses have been closed in parts of the country, including the capital Colombo.

Sri Lanka's President Mahinda Rajapaksa visited the town of Beruwala, where some of the clashes occurred, on Wednesday and promised an investigation and that the government will rebuild damaged homes and businesses.

Orange-robed Buddhist monks were amongst the most visible presence at a protest against the communal clashes, in Colombo on Wednesday. They were seen holding Tamil-language signs, a rare and iconic sign of solidarityy with the mostly-Hindu Tamil minority.

The protesters warned against divisive identity politics opening up new rifts in a country that struggled with a decades-long civil war between the Sinhalese-majority government and Tamil separatist rebels.

The violence in the towns of Beruwala, Aluthgama and Dharga have been condemned by the international community, including the United States, U.N. and EU.

The National Christian Evangelical Alliance of Sri Lanka also released a strongly-worded statement on Tuesday, criticizing "the blatant attack on members of the Muslim minority."

"In recent months Muslims and Christians alike have been subjected to hate speech and numerous attacks and violence against their places and practices of worship," said the statement. "Social polarization along religious lines is something Sri Lanka can ill-afford, particularly at this juncture of our history where as a country we are yet to resolve the ethnic conflict that manifested itself in a thirty year long war."

Bodu Bala Sena, which literally translates to Buddhist Power Force, is a right-wing Buddhist group that was established after the end of Sri Lanka's decades-long civil war in 2009. They belong to the country's Sinhalese Buddhist majority and have been accused of inciting hate against other religions in Sri Lanka.