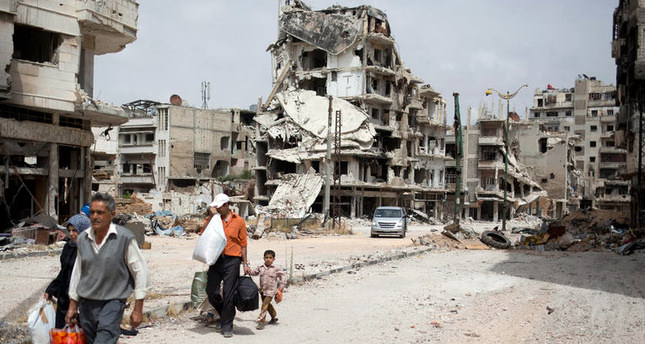 by Jun 21, 2014 12:00 am
The humanitarian situation in Syria is worsening and the number of people needing urgent help has reached 10.8 million - almost half of Syria's population of 22 million, U.N. Secretary-General Ban Ki-moon said Friday.

Ban's monthly report to the U.N. Security Council said the current estimate of 3.5 million people living in areas that are difficult or impossible for humanitarian workers to reach is also likely to have increased to 4.7 million people.

The U.N. chief painted a grim picture of a country gripped by severe levels of violence, including the intensified use of barrel bombs by government forces against civilian areas and suicide attacks, reported executions and other acts of terrorism by extremist groups.

Ban said the rules that govern the conduct of war "are being flagrantly violated every day."

"Efforts to expand humanitarian assistance to those most in need have been met with continued delays and obstruction," he said.
Currently, all U.N. aid must go through Damascus - a practice which U.N. humanitarian chief Valerie Amos has repeatedly criticized.

The secretary-general said the U.N. is unable to provide an assessment of the presence and activities of foreign fighters in Syria. But he said the recent advance of al-Qaida-inspired ISIS is expected to have an impact on Syria's eastern regions "and may strengthen the presence of extremist groups in (ISIS) controlled areas of Syria."

The Security Council approved a resolution in February demanding that all sides in the Syrian conflict allow immediate access for aid, but as Ban's latest report indicates, the situation has worsened.