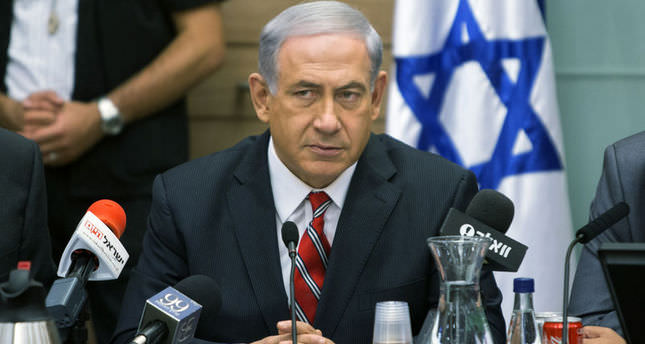 by AA Jul 04, 2014 12:00 am
Israeli Prime Minister Benjamin Netanyahu on Thursday said that that he has two possibilities in the Gaza Strip: either Gazans stop their rocket attacks on Israel or Israeli forces on the ground would respond forcefully to these attacks.

"We are preparing for two possibilities: first that the firing at our communities will stop and then our operations will stop as well," Netanyahu was quoted by his spokesman Ofir Gendelman as saying during a reception at the residence of the U.S. Ambassador in Tel Aviv Dan Shapiro on the occasion of the U.S. Independence Day.

"Second possibility: the firing at our communities in the south will continue, then the forces in the field will act forcefully," he added.

Tensions are high on the Gaza-Israel border with the Israeli military aircraft launching several strikes against targets inside the Gaza Strip in reaction to what it called a surge in rocket attacks from the Palestinian enclave.

Israeli Foreign Minister Avigdor Lieberman was quoted by Israel Radio earlier this week as calling on his government to consider the reoccupation of Gaza.

The violence also comes hard on the heels of the June 12 kidnapping and subsequent killing of three Israeli teens in the West Bank.

Soon after the kidnapping of the teens, Netanyahu accused the Gaza-based Palestinian resistance movement Hamas of standing behind it.

Resistance movements in Gaza, for their part, kept firing rockets on Israel, with four of these rockets slamming into the southern parts of the self-proclaimed Jewish state on Thursday.