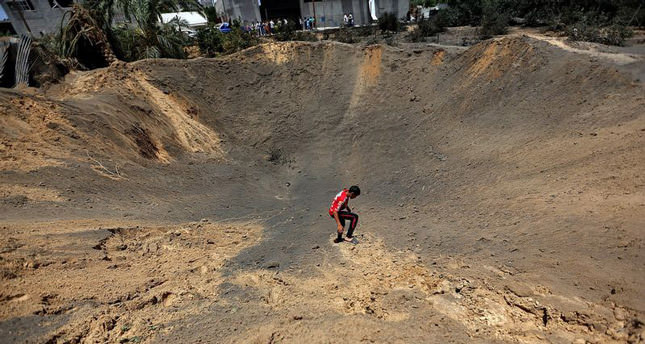 Warplanes fired three rockets at a facility belonging to Gaza's National Security apparatus near the border with the Egyptian city of Rafah.

Another rocket fell in agricultural land near Palestinian Rafah in the Gaza Strip, according to eyewitnesses.

Earlier Friday, a young Palestinian man was shot in the back by Israeli forces near a refugee camp in central Gaza, according to Gaza Health Ministry spokesman Ashraf al-Qudra.

Israeli forces had earlier launched a series of airstrikes on Gaza and a mass arrest campaign in the West Bank. Palestinian militants, meanwhile, fired dozens of rockets into Israel.

The stepped-up violence, which has left at least ten Palestinians dead, comes following the alleged kidnapping of three Jewish settlers in a West Bank settlement in June, for which Israel accuses Hamas.

Hamas, for its part, has repeatedly dismissed Israel's accusations, which have not been accompanied by any evidence.

Israeli airstrikes on Gaza intensified over the past several days after Israel announced that the three settlers had been found dead near the West Bank city of Hebron.

No Palestinian group has claimed responsibility for either the settler's alleged kidnapping and murder or the rocket fire from Gaza.