US teen says did not throw stones, was brutally attacked by Israeli troops 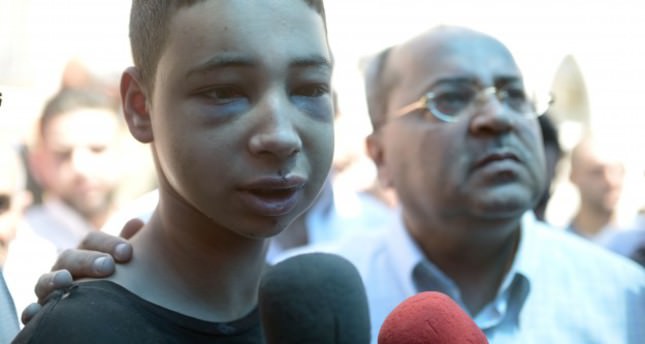 by AA Jul 07, 2014 12:00 am
An American teen insisted on Sunday that he did not throw stones at Israeli troops and was simply trying to escape when caught and badly beaten by Israeli policemen.

"I didn't throw stones, I was trying to run away," Tariq Abu Khadeer, 15, told reporters shortly after his release from Israeli police custody.
"I was brutally attacked by Israeli police in Shuafat. I saw three people hitting me," he added.

Israel has opened an investigation into the Israeli police beating of the American teen, whose cousin was abducted and murdered by suspected Jewish settlers on Wednesday.

A video which surfaced on Friday showed two Israeli officers badly beating Tariq who was handcuffed and lying on the floor.

One of the officers seems to be sitting on the teen while the other is kicking him. He was eventually dragged away by the police.

The video has prompted outrage among Palestinians.

On Saturday, U.S. State Department spokeswoman Jen Psaki confirmed that the teen was being held by Israeli authorities and said a consular officer had visited him.

"I am speechless about the situation," said Tariq. "I feel bad for what summer vocation turned out to."

"I am asking for Obama, as Tariq is an American citizen, to say something against what happened to Tariq and his cousin," he told reporters.

Tariq is the cousin of the Palestinian teen Mohamed who was abducted and killed by suspected Jewish settlers on Wednesday.

Mohamed's charred body was found in a forest near Jerusalem in a suspected "revenge" attack by Jewish settlers for the recent killing of three Israeli teenagers who went missing from a West Bank settlement.

Preliminary autopsy report showed that he had been burnt alive by his kidnappers.

Footage taken from a security camera near his Jerusalem home showed what appeared to be Jewish settlers abducting the boy.

In the footage, the kidnappers can be seen forcing him into their car before speeding off.

Tension has mounted since three Israeli settlers who went missing in June were found dead last week near the West Bank city of Hebron.

In the three weeks since the settlers' initial disappearance, Israel has rounded up hundreds of West Bank Palestinians, including lawmakers, former cabinet ministers and senior Hamas members.

No Palestinian group has claimed responsibility for the settlers' disappearance or subsequent death.