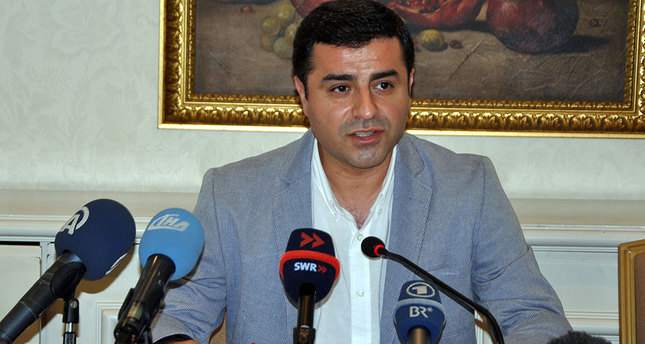 Pro-Kurdish People's Democratic Party (HDP) presidential candidate Selahattin Demirtaş on Friday lambasted Republican People's Party (CHP) leader Kemal Kılıçdaroğlu's remark that if necessary, the CHP would take up arms to defend Turkey's integrity against Kurdish independence.
Demirtaş stated that there is no threat against the integrity of the country, and politicians need to work to solve the country's problems with peace and dialogue, not with weapons and violence. The HDP presidential candidate added that Kılıçdaroğlu's remark might instigate provocateurs, meaning politicians should be more careful about what they say in public.

"[Kılıçdaroğlu's statement is] a careless statement. His speech gives the impression that there is a serious division in Turkey, but there is not. Kılıçdaroğlu's speech may imply that Kurdish people want to divide the country, but, Kurdish people don't want division, and there is not a threat of division in the country. What falls to a politician is to suggest peaceful and dialogue-based solutions to the country's problems, not to urge people to arm."

Turkey's presidential race will be contested by Prime Minister and Justice and Development Party (AK Party) candidate Recep Tayyip Erdoğan, HDP candidate Demirtaş, CHP and Nationalist Movement Party joint candidate former Organization of Islamic Cooperation Secretary-General Eklemeddin İhsanoğlu. Demirtaş made striking comments on the upcoming election when he was quoted as saying that none of the candidates, including him, represent a profile that all of the citizens will vote for with a clear conscience.

The HDP presidential candidate added that there is no woman candidate, and certain social segments are also not represented in the upcoming presidential election.

Touching on Israeli airstrikes on the Gaza Strip, Demirtaş said that while Turkey asserts that it is a fundamental actor in the region, it is sad that it does not have any influence to stop the violence. Demirtaş also asserted that Turkey's foreign politics is desperate.
Last Update: Jul 12, 2014 2:29 pm
RELATED TOPICS