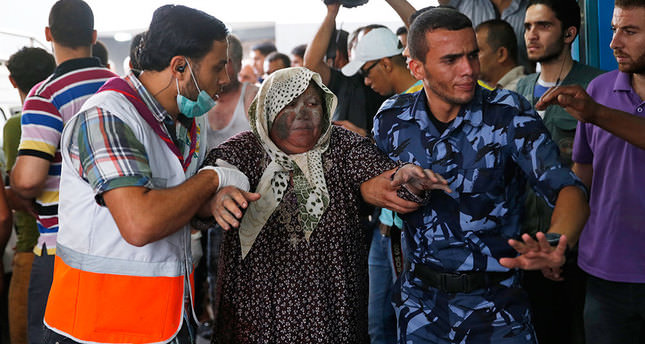 by AA Jul 20, 2014 12:00 am
Al-Shifa Hospital, the main medical facility in the Gaza Strip, has opened its doors for thousands of Palestinians fleeing an ongoing Israeli shelling of eastern Gaza City, which has left at least 13 people dead.

An Anadolu Agency correspondent in the scene reported that thousands of Palestinians had headed to the hospital for shelter.

Long lines of Gaza families had been seen walking on foot towards the hospital from the eastern parts of the city.

The hospital's administration had opened its wards to give shelter to women and children, while the flow of injured people coming into the facility continued, he added.

Many wounded people are being treated on the floor, as the hospital's rooms become overcrowded, the AA correspondent said.

Some of the displaced Palestinians told AA that their houses were being indiscriminately pounded by the Israeli artillery fire, which left scores dead and injured.

The Israeli army also fired at the ambulances and civil defense vehicles, they added.

Earlier in the day, Health Ministry spokesman Ashraf al-Qodra told Anadolu Agency that at least 13 Palestinians were killed and 200 others injured in Israeli shelling of residential areas in eastern Gaza City.

Al-Qodra also accused the Israeli forces of preventing medical crews from reaching the affected areas to give assistance to the wounded.

Dozens of Israeli tanks and military vehicles have forced their way into the eastern parts of Gaza City amid heavy artillery fire from the Israeli tanks in the area, prompting thousands of Palestinians to flee their homes towards the center of the city.

The incursion was coupled with heavy fighting between the Israeli troops and Palestinian resistance fighters, the witnesses added.

Since July 7, Israeli army has been pounding the Gaza Strip with devastating air and naval bombardment with the ostensible aim of halting rocket fire.

On Thursday, the Israeli army launched a ground assault into the Palestinian territory, sending thousands of troops into the blockades seaside enclave.

At least five Israeli soldiers have been killed in the Gaza Strip since Thursday.