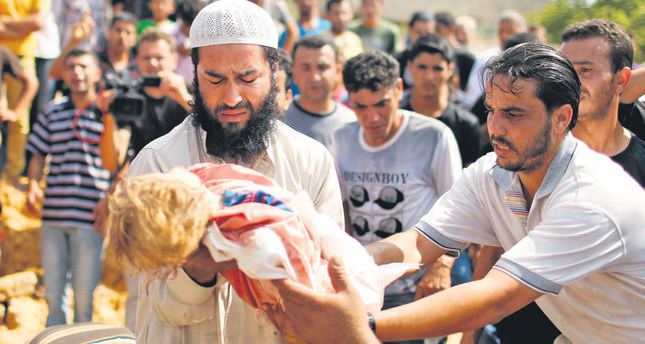 Told by the Israeli military to leave the war zone and having nowhere else to go due to closed borders with Egypt and Israel, ordinary people of Gaza have no choice left but to die

The Gaza Strip, which has been subjected to occupation and bloody military operations, is experiencing another one due to Israel's aggressive stance toward Hamas and Gazans regardless of whether they are militants or civilians.

Israeli officials have been repeating that Israel has the legitimate right to defend itself and label all Gazans as terrorists. When Israeli officials are reminded of the fact that many Gazans are civilians and unarmed, they say that Gazans should leave the battle zones.

However, they cannot leave, as they have been trapped in Gaza, which is surrounded by Israel, Egypt and the sea. There is no exit from Gaza as both Israel and Egypt keep their border gates closed. Israel, even in peace time, kills anyone who goes more than 3 kilometers out to sea.

The international community has failed to stop Israel's aggression and some countries haven't issued condemnations against the Israeli government despite the increasing civilian death toll. The Israeli army, which launched a ground invasion last Friday, said yesterday it lost 13 soldiers in heavy fighting.

While the death toll in Gaza passed 400 since the operation started, the toll is likely to increase as Israel becomes more aggressive. A Turkish journalist, Mehmet Akif Ersoy, who is covering the latest incidents from Gaza, said on his Twitter account that Israel will become more aggressive as Hamas' armed wing, al-Qassam Brigades, will kill more troops during the fight on the ground. Israeli Defense Forces confirmed that five Israeli troops were killed while Hamas sources claim that they killed near 15 Israeli soldiers.

Israel's intensified attacks on Gaza's Shujaya neighborhood left more than 40 dead in one night. Gazans said the attacks have started to resemble the Sabra and Shatila massacres in the Lebanese Civil War, which were committed by right-wing Lebanese factions, the South Lebanon Army and Israeli forces under former Israeli Prime Minister Ariel Sharon in the 1980s when he was minister of defense.

Touching on the situation in Shujaya, Anadolu Agency correspondent Metin Yüksel Kaya, one of the first journalists to enter Gaza's Shujaya district after Israeli shelling said, "[There are] no words to describe it. Half the neighborhood is burned down. Streets are full of bodies. It is just like Syria." The Palestinian Authority declared three-day-long national mourning.

After the Israeli army heavily bombed Shujaya, a two-hour cease-fire was demanded by Hamas to re-supply basic humanitarian needs as there were hundreds of wounded people. The cease-fire did not last more than one hour. The Israeli army claimed that Hamas fired rockets during the cease-fire. "Once more Hamas breaches the ceasefire. This time brokered by the ICRC [International Committee of the Red Cross] for a humanitarian hiatus,"

While Palestinian Authority President Mahmoud Abbas arrived Sunday in Doha to discuss the situation, Hamas political chief Khaled Meshaal arrived in Kuwait from Qatar on Sunday for talks on reaching a ceasefire agreement between Palestinian factions and Israel. The U.S. said "it will save lives if Hamas accepts truce." Yet, any further comment on the civilian deaths has not been mentioned.