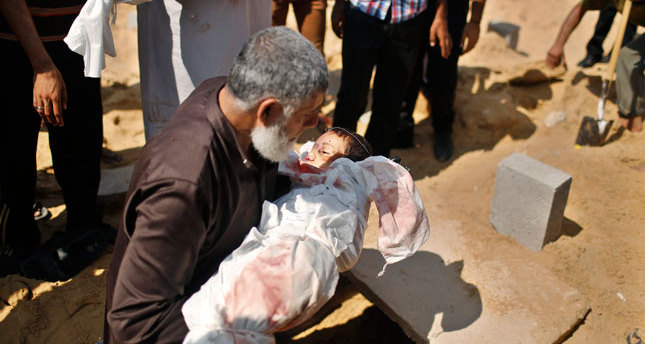 by Jul 23, 2014 12:00 am
The United Nations Human Rights Council approved a motion to investigate human rights violations perpetrated by Israel during its assault on the Gaza Strip. Meanwhile, Israeli tank shells hit a compound housing a U.N. school in the Gaza Strip yesterday, killing at least 15 civilians.

The 46-member-council met at the headquarters of UNHRC in Geneva. Twenty-nine states cast their votes in favor of a Palestinian-drafted resolution, with support from Arab and Muslim countries, China, Russia, Latin American and African nations, with 17 states, including some European nations abstaining. The U.S. was the only member country to vote against the resolution.

Israel rejected all allegations over committing "widespread, systematic and gross violations of international human rights and fundamental freedoms" against Palestinian civilians. The Israeli government harshly criticized the resolution. "The decision... by the UNHRC is a travesty and should be rejected by decent people everywhere,"

Prime Minister Benjamin Netanyahu's office said in a statement released after the council's decision. Netanyahu's office criticized the commission of inquiry for investigating only Israel rather than Hamas. "Rather than investigate Hamas, which is committing a double war crime by firing rockets at Israeli civilians while hiding behind Palestinian civilians, the HRC calls for an investigation of Israel, which has gone to unprecedented lengths to keep Palestinian civilians out of harm's way, including by dropping leaflets, making phone calls and sending text messages,"

Anadolu Agency reported. "The [council] should be launching an investigation into Hamas's decision to turn hospitals into military command centers, use schools as weapons depots and place missile batteries next to playgrounds, private homes and mosques," Netanyahu's office added.

As the high number of civilian deaths raises concerns over Israel's apparent breaches of human rights and international law against the people of Gaza, Navi Pillay, U.N. High Commissioner for Human Rights, at the opening meeting of special session at the UNHRC in Geneva, condemned Israel's latest attacks while calling Israeli government to protect innocent Palestinian civilian's lives. "There seems to be a strong possibility that international law has been violated, in a manner that could amount to war crimes," the U.N High Commissioner said. "Only those responsible for criminal acts could legitimately be punished," she added.

During the special session, a Palestinian spokesman raised his country's concern over "the fundamental right to life of the Palestinians [being] severely endangered. Whole families were being killed, and journalists and medical teams were being targeted."

Palestine also stressed the dire need for establishing "a fact-finding mission" to visit the Palestinian territories in order to investigate human rights violations. Three United Nations workers have been killed by Israeli air strikes which hit a UN Relief and Works Agency (UNRWA) shelter home to hundreds of displaced Palestinians in the besieged Gaza Strip on Thursday.

UNRWA's spokesperson Chris Gunness on his Twitter account has stated that the school was sheltering about 1,500 displaced people in Gaza took a direct hit from Israel. He noted that three UN teachers, two women and one man were killed. Israel's ongoing military offensive dubbed "Operation Protective Edge," which was launched on July 7, has left at least 800 Palestinians dead, many of whom are civilians. In addition, at least 4,750 Palestinians have been injured.
Last Update: Jul 25, 2014 11:42 am
RELATED TOPICS