No Eid for Muslim Rohingya refugees in Bangladesh 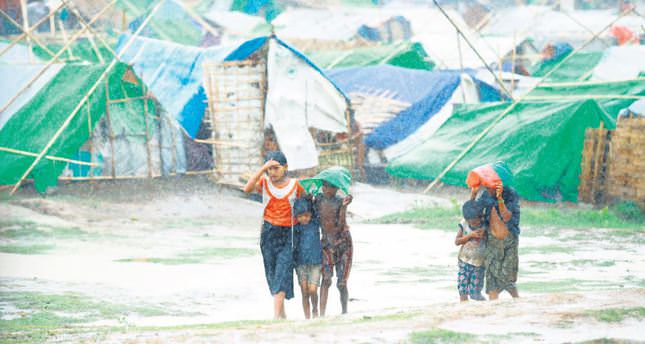 Rohingya refugees who fled from Myanmar to Bangladesh face difficult conditions in refugee camps. They do not have job, a health-care system or even adequate shelter. There is no Eid to celebrate, refugees say

Another Eid al-Fitr comes as hundreds of thousands of Muslim Rohingya refugees, who fled Myanmar for Bangladesh after serious communal violence, continue to face a future without jobs, health care, homes or a world that cares about their fate.

Eid-al-Fitr is now upon us, but that has not affected Seno Ara in any way. She is busy with her paddle sewing machine, fashioning clothes for the other Rohingya women refugees, like her and many others, in the camp in Kutupalong of Cox's Bazar in Bangladesh.

Seno Ara, 27, lives in a tiny shack made of bamboo sticks and poly sheets, with a five-feet-high and two-feet-wide door, and no window. Since there is no electricity in the camp and no light inside her home, she must find the light of day on her doorstep, to sew. "We have neither Eid, nor pleasure," says Seno Ara. "We do not have money to have even new cloths for Eid."

She has been living in this unofficial Rohingya camp for six years. (The unofficial camp takes in all the refugees that the nearby official U.N.-run one, at full capacity, cannot). She was forced to migrate and take shelter here after suffering from incessant persecution in her homeland, Myanmar, where she lived in Mondu, along with her 35-year-old husband Ershad Ullah and their two daughters. "All our assets were forcibly taken away by state-sponsored goons," Seno Ara says. "There was no peace. Every day, we were forced to work, to plow and cultivate their land and to cut firewood, but they never paid any money in return."

One night, Seno Ara had had enough. With her family, she escaped on a dingy boat across the Naf river, which marks the border between Myanmar and Bangladesh. But life in the Bangladeshi camp has proved grueling.

Five months ago, Seno Ara's husband was diagnosed with a mental disorder, she cannot recall the name. He often cannot recognize his wife and children. He talks to himself and suffers from memory lapses. This prevents him from working and earning a living.

Seno Ara managed to scrape some money together and purchase a 5000-taka (about $65 [TL136]) sewing machine, which helps her earn at least 2,500 taka, on average, per month, far from enough to sustain a family of four.

Many Muslim Rohingyas have fled from western Myanmar, a country which is predominantly Buddhist. The authorities deny them citizenship, claiming that they originated from Bangladesh (at the time called Bengal) during British rule. According to the Immigration Ministry, cited by the Thomson Reuters Foundation charity, there are approximately 1.33 million in the country. They also cannot travel, marry or receive medical care without official permission, according to the Thomson Reuters Foundation. "We are not able to practice our religion," says another refugee Nurul Islam, 42. "We cannot not pray together. They closed one mosque in Mondu for 15 years."

According to Bakhtiar Ahmed, a former member of Rajapalong Union Council, there are at least 40,000 Rohingya refugees, including women and children, living in the Kutupalong camp, which, barely a comfort, has 16 mosques for prayer. "Refugees live here in very inhumane conditions," Bakhtiar adds. "They do not have access to adequate healthcare, education and food. Some NGOs have built a few tube-wells so that they can get access to water, which they can use for drinking and taking baths. "There are no concrete-made toilets for them, but recently, the Bangladeshi government gave permission to the International Office of Migration to build a few," says Bakhtiar. Most of the young adults are not allowed to work outside the camp. They kill time by playing soccer, cards or Carrom board (resembles billiard or table shuffleboard and is popular in South Asia).

Some of them take the risk of climbing up the hills to gather firewood to sell in the market. Mohammad Hashem, 22, usually collects firewood on the Bangladesh-Myanmar border, in the hills near Tombru. "If I don't work, that means no food for the day," he says. "I earn only 3,500 taka ($45) per month, at most, to provide for five people." But, for the past three months, Hashem has not been able to work. "I was attacked by the Myanmar border guards while chopping wood one morning," he explains. "They chased me with a long knife and attacked me. My right shoulder and the top of my head sustained injuries." His brother now has to beg door to door. They also receive relief from various groups, namely from Turkey, but these do not wish to be identified as the Bangladeshi government frowns upon any relief given to unregistered Rohingyas. The camp - locally known as Tal, which means "pile" or "stack" - is divided into several blocks. Each has several sections. Most of the houses are made of clay and bamboo sticks with poly sheets. The refugees use coarse mats made with bamboo slips, also used for the toilets, as beds.

Life becomes especially miserable during monsoon season. Heavy rains cause houses' walls to collapse as the water washes away the floors. The refugees try as they can to limit the damage by putting big sand bags near their houses or installing drains, which crisscross throughout the camp in order to channel the water out. Amidst these atrocious conditions, a slight glimmer of hope flickers in the form of 60 small schools, which provide education to children living in the camp. "Despite a lot of pressure not to initiate an education program here without proper permission, I decided to step forward because kids need their basic education, so that they don't go on a wrong track," says the education program supervisor of the schools, Mohammad Iqbal, 32, whose friends provided help with the teaching. They now operate all these school, providing education up to the 3rd grade.

There are 30 teachers, who have studied up to an eighth grade level themselves. "It is difficult for us to find teachers within the camp," Iqbal says. "These teachers are, at least, capable of teaching students up to the third grade." They prepared the academic curriculum on their own. "We take the admissions of students who are interested, explains Iqbal. The minimum age is set at six. But we take students who are, on average, 10 years old."

Each day, Jannat Ara, 15, who studied up to the seventh grade, teaches in five schools. "I teach environment and we have several other subjects such as: Bangla, English, mathematics and sometimes Burmese in the school curriculum," Jannat says. "I will go further in my studies," she adds.

"My mother has a dream to see me going to the university. But we need to save money to fulfill this dream."

The unregistered Rohingya refugees are not recognized as "refugees" in Bangladesh, which therefore provides no official support. "Despite official restrictions, there are a few Turkish organizations that come with some generous support, such as Deniz Feneri Dernegi [Association of Lighthouse]
in the Kutupalong camps," says Bakhtiar.

The humanitarian-aid non-governmental organization, Doctors Without Borders Holland, has a clinic across the street that provides some basic health services for the refugees, as it does for all Bangladeshi citizens. Nearby though, the registered camp, run by the U.N. Refugee agency (UNHCR), provides all the basic facilities required for its 30,000 Rohingya refugees. They have schools and even a computer center for students.
Last Update: Jul 28, 2014 1:25 am
RELATED TOPICS