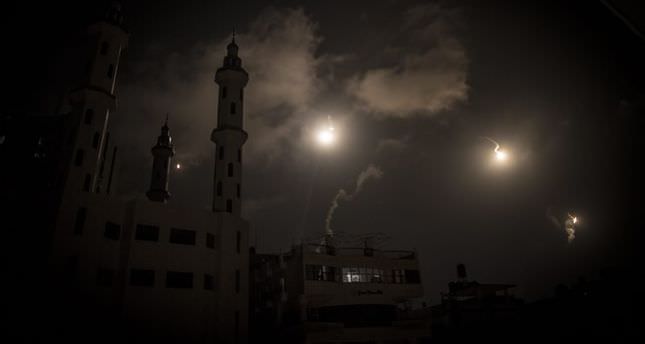 by AA Jul 29, 2014 12:00 am
The Gaza Strip's only power plant was forced to shut down Tuesday after an Israeli attack hit the facility's fuel depot, a Palestinian official said.
"The power plant will stop operation following the attack on the fuel depot," Fathi Al-Sheikh, the deputy head of Gaza's power authority, told Anadolu Agency.

He said that damage in the power plant might take "a whole year" to repair.

Even before the shutdown, Palestinians in the Gaza Strip only had electricity for about three hours a day because fighting had damaged power lines.

Gaza's power plant resumed operations in mid-December following seven weeks of closure due to shortages of the fuel needed to operate it.

Gaza's power plant requires some 650,000 liters of diesel fuel for its daily operations.

Gaza receives 120 megawatts of electricity from Israel each day and buys a further 28 megawatts from Egypt, according to the Gaza Energy Authority.

Since July 7, Israel has pounded the Gaza Strip-from air, land and sea-with devastating bombardments with the ostensible aim of halting rocket fire from the strip.

At least 1119 Palestinians have been killed and more than 6550 others injured in the relentless Israeli attacks on Gaza, according to the Palestinian Health Ministry.