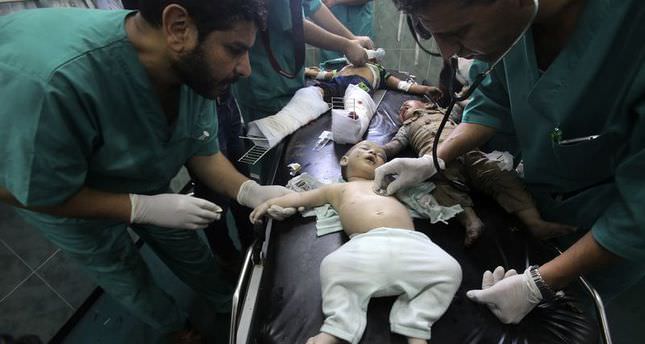 by AA Jul 31, 2014 12:00 am
The Palestinian death toll from the ongoing Israeli offensive in the Gaza Strip has crossed 1500 by Friday evening after at least 40 Palestinians were killed in Israeli shelling of southern Rafah city, according to a Health Ministry spokesman.

At least 30 bodies of Gazans have also been extracted from border areas which have been besieged by Israel over the past days, spokesman Ashraf al-Qodra told Anadolu Agency.

He also said that the injury toll has reached 8600.

An Israeli official earlier said on Friday that a 72-hour humanitarian ceasefire in the Gaza Strip which had gone into effect at 8am local time (5pm GMT) had collapsed, saying Hamas operatives killed two soldiers and captured another.

Hamas, for its part, said Israel is using an incident from prior to the ceasefire in order to justify a unilateral breach of the truce, offered by U.S. Secretary of State John Kerry and United Nations chief Ban Ki-moon.

Israel has been pounding the Gaza Strip for almost four weeks, claiming that the offensive aims to undermine the ability of Palestinian factions to fire rockets at Israeli cities.

According to Israeli figures, at least 63 troops have been killed in battles with Palestinian fighters and three civilians by rocket fire.