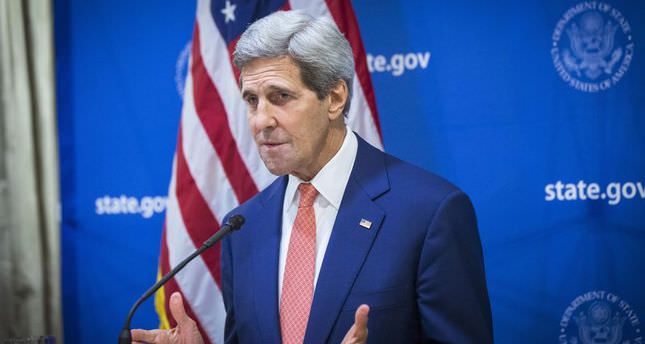 by Aug 06, 2014 12:00 am
A Gaza ceasefire was holding on Wednesday and U.S. Secretary of State John Kerry, echoing Israel's position, linked a lifting of blockades of the devastated enclave to Hamas giving up its rocket arsenal.

Israel withdrew ground forces from the Gaza Strip on Tuesday morning and started a 72-hour ceasefire with Hamas mediated by Egypt as a first step towards negotiations on a more enduring end to the month-old war.

"What we want to do is support the Palestinians and their desire to improve their lives and to be able to open crossings and get food in and reconstruct and have greater freedom," Kerry said.

"But that has to come with a greater responsibility towards Israel, which means giving up rockets, moving into a different plane," he said on the BBC's HARDtalk programme.

Kerry said all this would "finally come together" as part of wider Israeli-Palestinian peace efforts that he has spearheaded but which have been frozen since April over Israel's opposition to a unity deal between Hamas and Western-backed President Mahmoud Abbas's Palestine Liberation Organization.

Israel sent officials to join talks in Cairo to cement a longer-term deal during the course of the current truce. Hamas and Islamic Jihad also dispatched representatives from Gaza.

In Gaza, where some half-million people have been displaced by a month of bloodshed, some residents left U.N. shelters to trek back to neighbourhoods where whole blocks have been destroyed by Israeli shelling and the smell of decomposing bodies fills the air.

Israeli Prime Minister Benjamin Netanyahu's security cabinet met late on Tuesday to discuss the aftermath of the fighting and strategy for the Cairo negotiations.

An Israeli official, who declined to be identified, said Israel wanted humanitarian aid to flow to the Gaza Strip as soon as possible.

But, the official said, the import of cement - vital for reconstruction - would depend on achieving guarantees that it would not be used by militants to construct more infiltration tunnels leading into Israel and other fortifications.

Palestinians demand an end to the Israeli-Egyptian blockade on impoverished Gaza and the release of prisoners, including those Israel arrested in a June crackdown in the occupied West Bank after three Jewish seminary students were kidnapped and killed.

Israel has resisted those demands.

"For Israel the most important issue is the issue of demilitarisation. We must prevent Hamas from rearming, we must demilitarise the Gaza Strip," Netanyahu spokesman Mark Regev told Reuters television.

Islamist Hamas, which seized the territory of 1.8 million Palestinians from forces loyal to Abbas in 2007, has ruled out giving up its weapons.

Gaza officials say the war has killed 1,867 Palestinians, most of them civilians. Israel says 64 of its soldiers and three civilians have been killed since fighting began on July 8, after a surge in Palestinian rocket launches.

Efforts to turn the ceasefire into a lasting truce could prove difficult, with the sides far apart on their central demands, and each rejecting the other's legitimacy. Hamas rejects Israel's existence and vows to destroy it, while Israel denounces Hamas as a terrorist group and eschews any ties.

Egypt has positioned itself as a mediator in successive Gaza conflicts but, like Israel, its current administration views Hamas as a security threat.

Besides the loss of life, the war has cost both sides economically. Gaza faces a massive $6-billion price tag to rebuild devastated infrastructure. Israel has lost hundreds of millions of dollars in tourism and other sectors and fears cuts in overall economic growth this year as well.

Palestinian officials said a donor conference to raise funds for Gaza's reconstruction would be held in Oslo next month.