US official: Airstrikes slow ISIS advance, do not remove threat yet 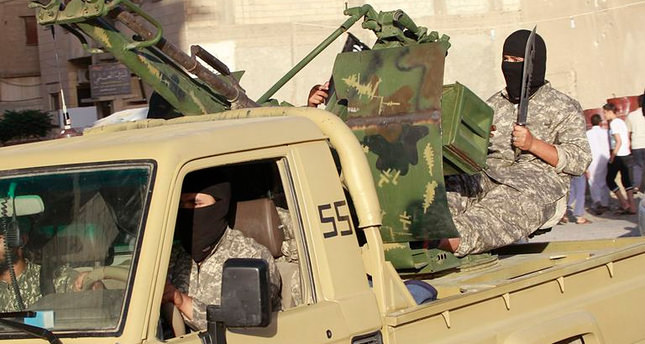 by AA Aug 12, 2014 12:00 am
A senior Pentagon official said on Monday that the U.S. air strikes on self-proclaimed Islamic State positions in northern Iraq have slowed down the ISIS militants' operational pace and temporarily disrupted their advances towards Erbil.

Lt. Gen. William Mayville, Director of Operations at the U.S. Joint Staff was speaking at a press briefing at the Department of Defense to give an update on U.S. operations in Iraq that for the last three days targeted ISIS's mortar positions, armored vehicles and personnel carriers.

"However, these strikes are unlikely to affect ISIS's overall capabilities or its operations in other areas of Iraq and Syria," he said.

The U.S. jets pursued the aerial bombardment of ISIS militants on Monday, targeting vehicles and checkpoints belonging to the group in northern Iraq, since President Barack Obama's Thursday authorization for airstrikes in support of U.S. personnel in the northern Iraqi city of Erbil, and forces in Iraq.

Mayville maintained that the U.S. strikes had a very temporary effect and still couldn't effectively contain or break the momentum of the militant threat in the regions they have been poundering.

He expressed concerns over the threat posed by the ISIS in Iraq and in the region. "They're very well-organized and well-equipped. They coordinate their operations. And they have thus far shown the ability to attack on multiple axes. This is not insignificant."

The U.S. commander spoke of no further plans to expand the scope of the current operations but said they are limited to protect its citizens, facilities, and aircrafts supporting humanitarian assistance, and to assist in the break-up of the militant siege on Mount Sinjar.

Marie Harf, deputy spokeswoman of the State Department, told reporters on Monday that the U.S. is supplying weaponry to the Kurdish Peshmerga forces who are in need of additional arms as the ISIS militants recently obtained some heavy ones.

"Iraqi central government has made deliveries from its own stocks to the Kurds, and we are working to do the same in coordination with all the relevant parties," she said.

"(The Secretary-General) encourages Prime Minister-designate Al-Abadi to form a broad-based government acceptable to all components of Iraqi society, in accordance with the constitutional time-frame," said a statement issued from his press office.

The bypassing of the current Prime Minister Nouri al-Maliki, who sought a third-term as prime minister, came as tensions rose and security forces supporting him stepped up their presence around key sites in Baghdad on Sunday evening.

The incumbent premier, accused by many of fomenting the current crisis in Iraq by promoting pro-Shiite sectarianism, previously blamed Masum for violating the constitution by not sticking to Sunday's deadline to appoint a prime minister.

U.S. Secretary of Defense Chuck Hagel, who was in Sydney for an annual meeting with Australian defense and diplomatic leaders, attributed the replacement of Maliki by a new prime minister to his ill-governance of the country.

Hagel said the embattled prime minister must shoulder the responsibility for failing his country in many ways.

"It is as unpredictable, dangerous, complicated as it's ever been. This is why a military solution is not going to end it or fix it," he said, describing ISIS as a "threat to the civilized world."

- US delivers fifth batch of aid to trapped Ezidis

Late Monday, the U.S. also delivered its fifth batch of humanitarian aid to Iraqi Ezidis who have been besieged by ISIS militants atop Mount Sinjar in northeastern Iraq for the last week.

In total, 76 bundles were dropped by C-17 and three C-130 cargo aircrafts overnight, according to Central Command, the Pentagon's Middle East command.

On Saturday, President Obama warned it was "going to take some time" to help stabilize Iraq in the face of the militant insurgency.