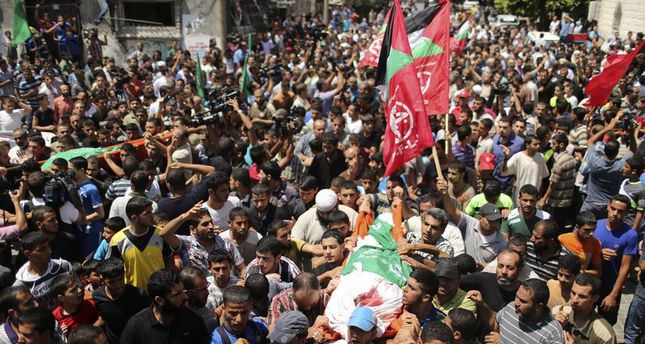 by AA Aug 20, 2014 12:00 am
Palestinian resistance group Hamas insisted on Wednesday that Israelis living near the border with the Gaza Strip could only return to their homes when the commander of the Ezzeddin al-Qassam Brigades, its armed wing, so decides.

"Israel will pay for its crimes against Palestinian civilians," Hamas spokesman Sami Abu Zuhri declared in a statement.

Israelis living near the border with the Gaza Strip, he added, could not return to their homes without Deif's approval and the lifting of the years-long Israeli blockade on the embattled coastal territory.

Deif was the target of an Israeli strike late Tuesday.

While the statement suggests he was not hurt, Deif's wife and daughter were both killed in the Israeli attack on a house in northwestern Gaza City's Sheikh Radwan neighborhood.

Nineteen Palestinians have been killed by Israeli strikes across the Gaza Strip since Tuesday, when the self-proclaimed Jewish state resumed its attacks on the Palestinian enclave.

The latest casualties bring to 2036 the total number of Palestinians killed in Israeli attacks since July 7, according to Palestinian Health Ministry spokesman Ashraf al-Qodra.

Israeli and Palestinian negotiators departed Cairo on Tuesday and Wednesday respectively following the collapse of indirect talks aimed at reaching a permanent ceasefire.

Israel claims it pulled its delegation from Cairo after rockets were fired from Gaza on Tuesday at different parts of Israel.

Since then, Israel has carried out several strikes on the strip, which is home to some 1.8 million Palestinians.

Hamas, for its part, denies any knowledge of Tuesday's alleged rocket barrage, accusing Israel of seeking to derail the indirect negotiations in Cairo.

For the last two weeks, the Egyptian capital has hosted indirect Palestinian-Israeli talks aimed at hammering out a permanent ceasefire arrangement.