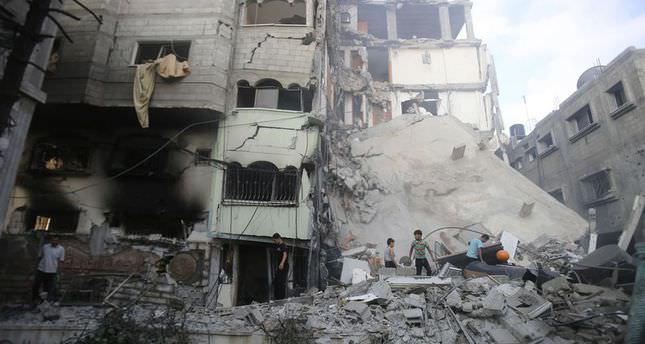 by AA Aug 25, 2014 12:00 am
At least 20 Palestinians were injured in an Israeli airstrike targeting a 14-storey building in the Gaza City early Tuesday, according to a Health Ministry spokesman.

He said that four firefighters and two journalists were among those injured in the attack.

According to eyewitnesses, Israeli planes fired three missiles into the building.

Witnesses said that Israeli army urged residents to evacuate the building shortly before the attack.

Since July 7, Israel has been pounding the Gaza Strip with the stated aim of halting rocket fire from the Palestinian territory.

At least 2133 Palestinians have been killed and nearly 11,000 others injured in relentless Israeli attacks, according to the Palestinian Health Ministry. Thousands of homes have also been destroyed in the offensive.

The Palestinian death toll from the Israeli offensive alone has surpassed the combined total fatalities from two past major operations - including 2008/9's operation "Cast Lead" which killed at least 1500 Palestinians in three weeks.