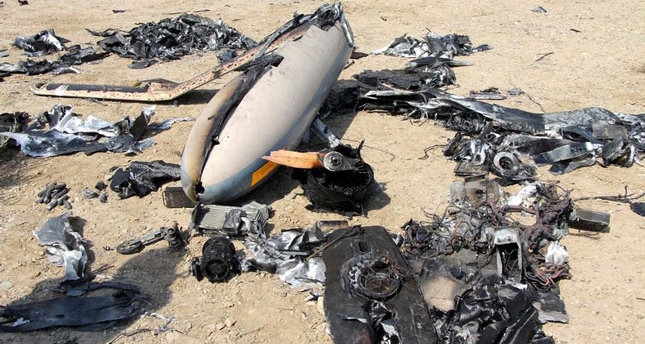 by Associated Press Aug 26, 2014 12:00 am
Iran's state TV on Monday broadcast footage purported to show an Israeli drone the country's Revolutionary Guard claimed to have shot down over the weekend near an Iranian nuclear site.

The brief video, aired on the Arabic-language Al-Alam TV, shows what the channel says are parts of the drone, scattered in an unidentified desert area. A scroll accompanying the footage says the drone was downed on Saturday and identifies it as a Hermes 450, a known Israeli model. The Iranian TV also says the model is dubbed "Spy Goddess." However, there were no visible Israeli markings on the aircraft in the footage and Israel's military has declined comment on the matter.

The incident comes as Iran negotiates with world powers over its controversial nuclear program and Iranian hard-liners press moderate President Hassan Rouhani to demand more concessions before limiting the country's atomic capabilities. Israel has not ruled out taking military action against Iran's nuclear facilities if its capability to build an atomic weapon progresses.

The Guard statement on Sunday said its forces fired a missile as the drone neared Iran's uranium enrichment facility in Natanz, some 240 kilometers (150 miles) south of the capital, Tehran, without providing more details.

On Monday, Gen. Amir Ali Hajizadeh, head of the Guard's airspace division, insisted that the drone was Israeli, though he said its last flight did not
originate in Israel.
Last Update: Aug 26, 2014 11:35 am
RELATED TOPICS