Schoolbags from Turkey for Palestinians 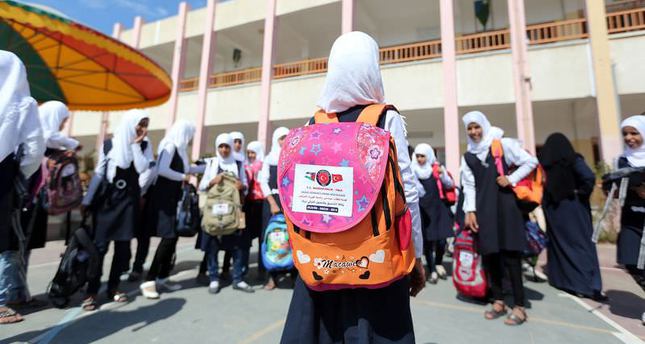 by AA Sep 21, 2014 12:00 am
The Turkish Cooperation and Coordination Agency (TİKA) has distributed 5,000 schoolbags to Palestinian students affected by the recent Israeli offensive on the enclave.

"The project aims to give 10,000 schoolbags to students of government schools in Gaza who were affected by the Israeli war," state-run TİKA's Gaza coordinator Abdullah al-Sudoudi said yesterday.

"We have already distributed 5,000 bags today on schools in northern Gaza," he added.

The rest of the schoolbags would be distributed in the embattled eastern parts of Gaza City, most notably Shujaya neighborhood, al-Sudoudi said.
The project mainly targets the school students who were directly affected by the Israeli onslaught, including those who lost their parents or homes, he said.

Israel's recent 51-day offensive on the coastal strip left some 2,150 Gazans dead and 11,000 injured-many critically-while partially or completely destroying thousands of buildings, including dozens of schools, across the Palestinian enclave. Over the course of Israel's "Operation Protective Edge," at least 72 Israelis-67 soldiers and five civilians-were killed.