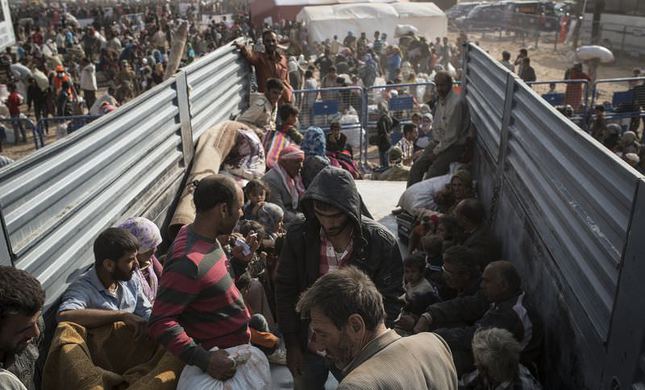 by Daily Sabah Oct 03, 2014 12:00 am
Amid continued aerial assaults against Islamic State of Iraq and al-Sham (ISIS) fighters, heavy fighting between ISIS militants and Kurdish forces continues as ISIS presses its assault to capture Kobani, a Syrian Kurdish town along the border with Turkey.

The U.S.-led coalition, organized to eradicate the radical ISIS threat, has gradually strengthened its power as the Australian cabinet authorized the deployment of Special Forces troops to combat ISIS militants and advise and assist Iraqi forces. The Abbot government will also issue warplanes to join airstrikes on ISIS in Iraq after the United Kingdom, Belgium and Denmark committed war plans to the struggle, approving airstrikes on ISIS positions.

Meanwhile, four airstrikes against ISIS in Syria were carried out by the U.S.-led coalition, and the militant targets in Iraq were also struck seven times, the U.S. Central Command announced Thursday, as the Anadolu Agency (AA) reported. Multiple ISIS facilities east of Aleppo were also hit by strikes, but no information was provided on whether they were damaged or destroyed.

Regarding the ISIS-led violence, the United Nations Assistance Mission for Iraq (UNAMI) and the Office of the United Nations High Commissioner for Human Rights (UNHCHR) jointly released a report on Thursday, detailing ISIS war crimes since the militants began to seize large swathes of territories both in Iraq and Syria. UNAMI announced that at least 9,347 civilians have been killed so far since the violence erupted in 2014.