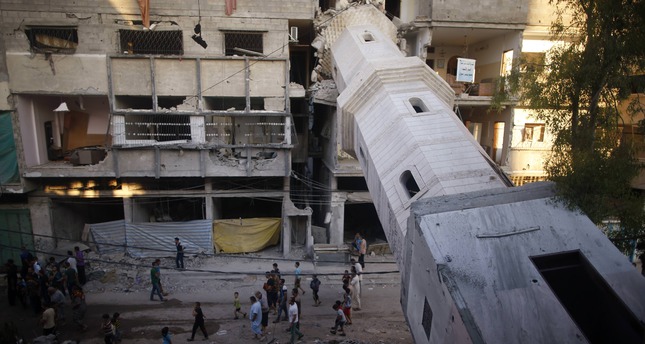 by AA Oct 05, 2014 12:00 am
A Palestinian official said Sunday that money needed-around $3.8 billion-for the reconstruction of the Gaza Strip could be collected during a donors conference in the Egyptian capital Cairo later this month, provided that the newly formed Palestinian national unity government took control of the strip.

Mohamed Shtayyeh, the head of the semi-official Palestinian Economic Council for Development and Reconstruction, said the government's control would leave donors with no excuse to fund the reconstruction of the Gaza Strip, which was violently battered by the Israeli army during its latest offensive on it.

He advised what he called the "shadow government" in the Gaza Strip to hand over control of the strip to the national unity government as soon as possible.

"It is only a few days and the conference will begin in Cairo," Shtayyeh told Anadolu Agency.

A few days ago, Saudi Arabia pledged to offer $500 million for the reconstruction of the Gaza Strip during the conference, which will be held on October 12.

Shtayyeh expressed fears that the failure of the national unity government to take control of the Gaza Strip would negatively affect the prospects of the conference.

He said the winter season is fast coming and that hundreds of Gaza families were still without shelter.

"Control by the national unity government over Gaza is the largest challenge to the donors conference and its organizers," Shtayyeh said.

He said if Gaza control remained to be away from the government, Israel might take this as an excuse for keeping Gaza crossings closed.

"This will bring us back to square one," Shtayyeh said. "It will mean that Gaza's conditions would continue to be the same as they were during the past seven years," he added.

Shtayyeh added that the Gaza reconstruction conference in Cairo would focus on neglected economic sectors, such as agriculture.

He said the Palestinian economy would continue to be weak so long as Israel continued to put restrictions on and controlled it.

"We have many local quality industries," Shtayyeh said. "Producers cannot, however, find markets for their products," he added.

He said the Palestinians needed to have a safe corridor between the occupied West Bank and the Gaza Strip as well as an international corridor through which they could export their products to other countries.

Shtayyeh accused Israel of intentionally weakening the Palestinian economy since the signing of the Oslo Accords in 1993.

The Palestinian Economic Council for Development and Reconstruction is responsible for preparing and implementing infrastructure projects, including roads, schools and facilities in the Palestinian territories. The council also prepares studies about new buildings that need to be added to Palestinian cities.