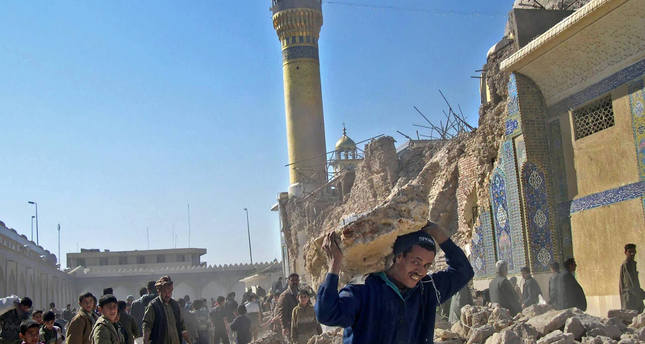 by Daily Sabah with Agencies
Nov 01, 2014 12:00 am
When Iraqi Prime Minister Haider al-Abadi took office, he was regarded as a moderate Shi'ite leader who could win over powerful Sunni tribal chiefs to the fight against Islamic State of Iraq and al-Sham (ISIS). Three months later, Sunnis who once helped U.S. Marines kick the ISIS's predecessor al Qaeda out of Iraq view Abadi with deep skepticism because he has yet to deliver on promises to support their neglected Sunni heartland Anbar province. Abadi, for his part, seems mistrustful of tribal leaders, who are plagued by divisions and accused of misuse of government funds and military support in the past. A 62-year-old British-educated Shi'ite Muslim engineer, Abadi is a much more conciliatory figure than his predecessor Nuri al-Maliki, whose policies were seen by most Sunnis as discriminatory, leading to an uprising in Sunni areas that was exploited by ISIS fighters this year. Washington, now providing air support for Iraqi forces, hopes that the new prime minister's outreach can rebuild the shaky alliance with Sunni tribal figures, particularly in Anbar, which helped the U.S. Marines defeat al Qaeda during the "surge" offensive of 2006-2007. But on the evidence of a televised meeting Abadi called this week with tribal leaders, he still faces a tough task. The prime minister spoke with little evident charisma, and many of the sheikhs listened to his appeal in stony silence. When they left, they said the government still hadn't understood their grievances or given them firm enough promises of support. "We're bewildered by Abadi's policy towards Anbar. We want to live in peace and bring back displaced families and stop the bloodshed," said senior tribal Sheikh Lawrence al-Hardan from Garma town in Anbar. "But the big question is will Abadi be able to tackle all these issues? The answer is no. What is happening in the country is beyond Abadi's ability and capacity."

After Abadi's attempt to create a rapprochement with Sunni tribes, the bodies of 150 members of an Iraqi Sunni tribe which fought ISIS have been found in a mass grave, security officials said on Thursday. ISIS militants took the men from their villages to the city of Ramadi and killed them on Wednesday night and buried them, an official in a police operations center and another security official told Reuters. In a separate case, witnesses said they found 70 corpses from the same Albu Nimr tribe near the town of Hit in the Sunni heartland Anbar province. Security officials there were not immediately available for comment.

Despite Abadi's call on Sunni tribes to help the Iraqi forces against ISIS, the Sunnis are not eager to join the anti-ISIS front since they do not trust Baghdad administration. In a recently released report by Amnesty International, which covers human rights violations in more than 150 countries, it was revealed that Iraqi people are not only suffering from atrocities committed by ISIS militants but also from armed government-backed Shiite militants. The report claims that the Iraqi government is largely responsible for the attacks on the civilians since the militias target Sunni Iraqis deliberately, as a response to the ISIS attacks, despite there being no concrete evidence that links ISIS and unarmed Sunnis.

The report said "In recent months, Shi'a militias have been abducting and killing Sunni civilian men in Baghdad and around the country. These militias, often armed and backed by the government of Iraq, continue to operate with varying degrees of cooperation from government forces – ranging from tacit consent to coordinated, or even joint, operations. For these reasons, Amnesty International holds the government of Iraq largely responsible for the serious human rights abuses, including war crimes, committed by these militias."

The report also underlines that many have been abducted and dozens of families were forced to pay ransom to get their relatives back. "The victims were abducted from their homes, workplace or from checkpoints. Many were later found dead, usually handcuffed and shot in the back of the head. Reports by families of the victims and witnesses have been corroborated by Ministry of Health workers, who told Amnesty International that in recent months they have received scores of bodies of unidentified men with gunshot wounds to the head and often with their hands bound together with metal or plastic handcuffs, rope or cloth.