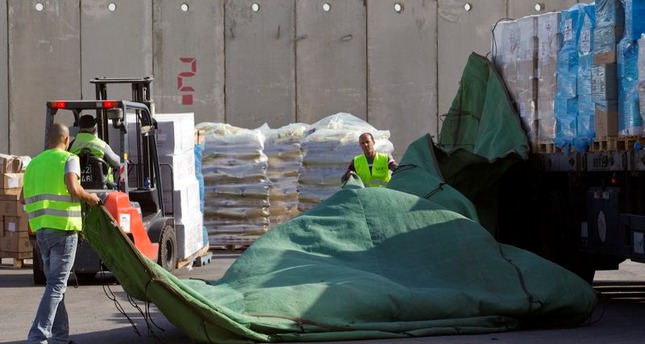 by AA
Nov 01, 2014 12:00 am
Israel will on Sunday close down Gaza's only functioning two crossings, namely Kerem Shalom and Erez.

He added that Israeli authorities did not mention a date for reopening the crossing, warning against the effect of the crossing closure on Gaza's foodstuff supplies.

He added that only Palestinians on emergency would be allowed to cross between the Gaza Strip and the occupied West Bank through the crossing.

Israeli army spokesman Avichay Adraee, meanwhile, confirmed news about the closure of the two crossings. He said the closure would be done in response to the launch of a missile on southern Israel late on Friday.

He did not, however, mention the duration of the closure of the two crossings.

Blockaded by Israel-by air, land and sea-since 2007, the Gaza Strip has seven border crossings linking it to the outside world.

Six of these crossings are controlled by Israel, while the seventh-the Rafah crossing-is controlled by Egypt, which keeps it tightly sealed for the most part.

Israel sealed four of its commercial crossings with Gaza in June 2007 after Palestinian resistance movement Hamas wrested control of the strip from the Ramallah-based Palestinian Authority.

As it currently stands, Israeli authorities allow the Kerem Shalom crossing-which links Gaza to both Israel and Egypt-to operate for commercial purposes.

The Gaza-Israel Erez crossing, meanwhile, is generally devoted to the movement of individuals between Gaza and the occupied West Bank.