Israel steps back amid growing tension over closure of Al-Aqsa 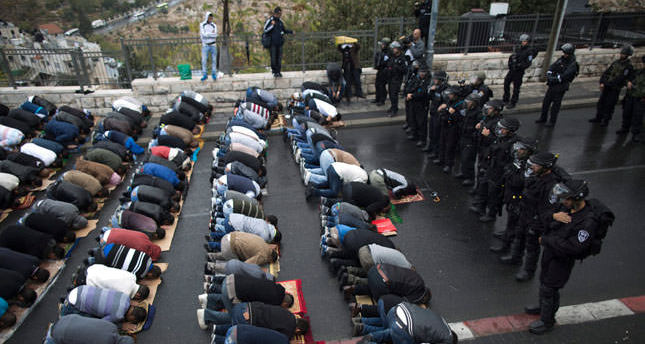 The Aqsa Mosque was reopened before the weekly Friday prayer, seen as a move by Israeli authorities to ease the tension that flared after the closure of the religious site

Israel reopened the Al-Aqsa Mosque compound in Jerusalem on Friday in an effort to ease the ongoing tension, allowing Muslims to take part in the weekly Friday prayer. After heavy criticism following the closure of the holy site from the U.S. and other countries, Israel lifted the clampdown on the holy shrine. However, only those over 50 were allowed to enter the mosque due to restrictive security measures, AFP reported. Despite relative calm prevailing in the streets of East Jerusalem following clashes sparked by the police killing of a 32-year-old Palestinian man on Thursday morning, who was suspected of having ties to the killing of a far-right Jewish activist on Wednesday night, some 3,000 police officers have still been heavily deployed around the holy site.

The U.S. voiced its concern over the closure of the al-Aqsa mosque while urging Israeli authorities to reopen the holy site to Muslim worshippers. "The continued commitment by Israelis, Palestinians, and Jordanians to preserve the historic status quo at this holy site is critical. Any decisions or actions to change it would be both provocative and dangerous," said the U.S. State Department spokesperson Jen Psaki, in a press briefing on Thursday.

Israel on Thursday ordered the first full closure of the Al-Aqsa mosque compound in 14 years. Since Israeli occupation of the West Bank, East Jerusalem and the Gaza Strip in June 1967, the Jordanian government, known as the Waqf, has been running the holy site. The compound is allowed for Muslim prayer alone, however, Jewish Israeli visitors are also allowed into the site under the surveillance of Israeli police. After former Israeli Prime Minister Ariel Sharon's visit to the Temple Mount, the holy site, this visit was seen as provocative and led to the Al-Aqsa Intifada in September 2000 and sparked the already tightened conflict between Israelis and Palestinians.

The tension in East Jerusalem was flamed after Israeli authorities announced the expansion of its settlement project that includes major construction in the area as well as an increase in Jewish settlers. The Palestinian district of East Jerusalem was captured by Israel during the 1967 Six-Day War and since then Israel has tried to expand its influence over the enclave by allowing Jewish settlers to reside in the disputed area.

Israeli settlements in the area have been escalating tension thereby triggering social unrest between Israeli settlers and Palestinians. The settlement of increasing numbers of Israeli Jews living in the predominantly Arab neighborhood of Silwan is considered part of a Jewish settler project.

Israel's continued settlement in occupied Palestinian territory threatens the pursuit of peace in the sacred territories through deepening divisions between two communities and further exacerbating the conflict, a senior U.N. official said at a Security Council meeting on Thursday. The official condemned Israel's decision to accelerate the progress of constructing some 2,600 residential units in Givat Hamatos, in East Jerusalem, which is seen as a breach of international law.

"The reality is that continued settlement activity in occupied Palestinian territory is doing significant damage to any possibility of a lasting peace between the two sides and is moving the situation ever closer to a one-state reality," Jeffrey Feltman, the U.N. Under-Secretary-General for Political Affairs said on Tuesday, briefing the Security Council at the meeting on the Israeli-Palestine conflict.

"The Swedish government must understand that relations in the Middle East are a lot more complex than the self-assembly furniture of IKEA and that they have to act with responsibility and sensitivity," said Israeli Foreign Minister Avigdor Lieberman in a statement on Thursday.