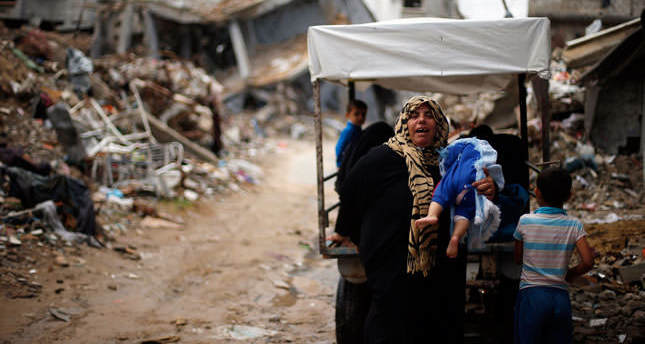 by daily sabah
Nov 01, 2014 12:00 am
A report released on Thursday that documented cases of Palestinian civilians who were used as human shields by Israeli military forces during Operation Protective Edge – the military operation that led to the 51-day conflict in the Gaza Strip – stated that Israel violated international law. The report, published by the Geneva-based Euro-Mid Observer for Human Rights, said that Palestinian civilians were subjected to "inhumane and abusive treatment such as beating, humiliation and exposure to the hot sun while naked for long periods of time" by the Israeli army. The report entitled "Israeli Matrix of Control: Use of Palestinian civilians as human shields" said that the use of humans as shields is a repeated Israeli policy in the occupied Palestinian territories citing similar cases reported in the West Bank based on testimonies collected by observers.

"The use of human shields is a form of cruel and inhumane treatment and constitutes a flagrant violation of international humanitarian law and a war crime according to the Rome Statute of the International Criminal Court," said the report.

The human rights organization urged the Fact Finding Committee of the Gaza Conflict, established by the U.N. Human Rights Council, to put "pressure on all parties found to be guilty of war crimes committed by the Israeli army."