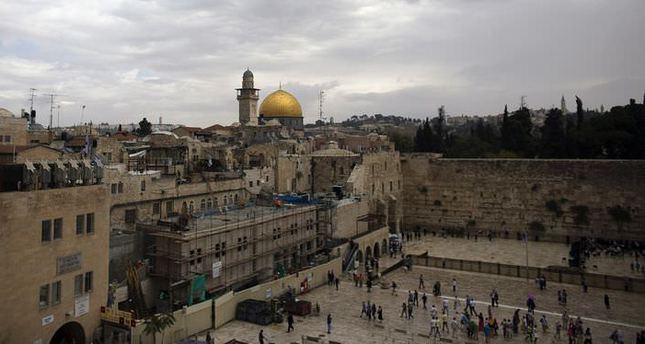 by AA Nov 01, 2014 12:00 am
U.S. Secretary of State John Kerry has called on Israeli Prime Minister Benjamin Netanyahu to keep the "status quo" at the Al-Aqsa Mosque compound in East Jerusalem.

In a phone call with Netanyahu on Friday, Kerry called for keeping the status quo at the holy site and avoiding taking provocative measures, according to Israel Radio.

The top American diplomat also apologized for Netanyahu for the quotes attributed to anonymous White House officials in a report by The Atlantic referring to the Israeli premier as "chickenshit".

"Such statements are disgraceful, unacceptable and damaging," Kerry said in a press conference.

Israel closed the Al-Aqsa Mosque compound on Thursday, shortly after the shooting of an extremist Jewish rabbi in Jerusalem.

Israel occupied East Jerusalem during the 1967 Middle East War. It later annexed the holy city in 1980, proclaiming as its capital - a move never recognized by the international community.

In September 2000, a controversial visit to the site by Israeli politician Ariel Sharon sparked what later became known as the "Second Intifada," a popular uprising against the Israeli occupation in which thousands of Palestinians were killed.