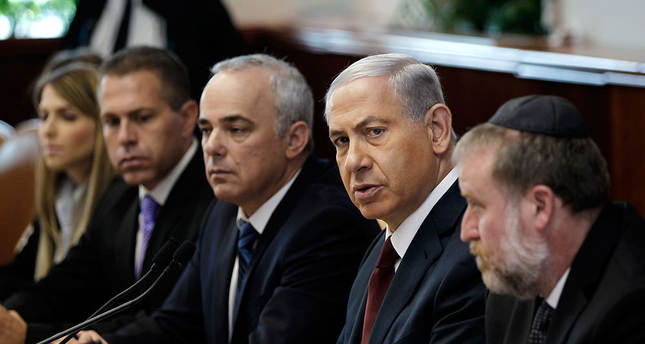 by Anadolu Agency Nov 03, 2014 12:00 am
In the largest publicly known protest by senior Israeli security staff, 106 retired Israeli Defence Force (IDF) generals, Mossad directors and National Police chiefs have sent a letter to PM Benjamin Netanyahu to "initiate a diplomatic process" based on a two-state solution and framework for peace with the Palestinians.

According to J.J. Goldberg's article in The Jewish Daily Forward, several signers of the letter told a TV interview that a two-state solution does not create a security risk for Israel, and the only reason it hasn't been achieved so far is due to "weak leadership."

"We're on a steep slope toward an increasingly polarized society and moral decline, due to the need to keep millions of people under occupation on claims that are presented as security-related," reserve Major General Eyal Ben-Reuven indicated in the interview. "I have no doubt that the prime minister seeks Israel's welfare, but I think he suffers from some sort of political blindness that drives him to scare himself and us."

He continued by saying he was "…tired of a reality of rounds of fighting every few years, instead of a genuine effort to adopt the Saudi initiative". His comments were made in an interview conducted on Friday, which was published in Israeli daily Yedioth Ahronoth.

The comments of the former commander, who initiated the letter, appeared to echo the Arab Peace Initiative, orchestrated by Saudi Arabia, which was adopted unanimously by the Arab League in 2002 and was later endorsed by 56 members of the Organization of Islamic Cooperation, with only Iran abstaining. The current framing of this proposal foresees Israel's withdrawal to pre-1967 armistice lines, the solving of land issues, and finding a negotiated solution to the Palestinian refugee issue. In exchange it expects peace, diplomatic recognition and normalization of relations between Arab states and Israel.

Goldberg said that the letter did not directly refer to this peace proposal, but it nevertheless appears to be dependent on the Saudis and Egyptians sponsoring a conference in order to initiate regional negotiations.

The letter is significant since it covers political issues rather than military ones, and has attracted a higher number of signatories than any past joint statement.

101 of 106 signatories are former IDF brigadiers of major generals, and they're joined by two former Mossad chiefs and three former National Police commanders.

The 106 signers of the current letter to Netanyanu include 101 IDF veterans with the rank of brigadier or major general, as well as two former chiefs of the Mossad intelligence agency and three former commanders of Israel's National Police.

Some portions of the letter published by Yedioth (translated by Ynetnews) are as follows:

"We, the undersigned, reserve IDF commanders and retired police officers, who have fought in Israel's military campaigns, know firsthand of the heavy and painful price exacted by wars.

"We fought bravely for the country in the hope that our children would live here in peace, but we got a sharp reality check, and here we are again sending our children out onto the battlefield, watching them don their uniforms and combat vests and go out to fight in Operation Protective Edge.

"This is not a question of left or right. What we have here is an alternative option for resolving the conflict that is not based solely on bilateral negotiations with the Palestinians, which have failed time and again... We expect a show of courageous initiative and leadership from you. Lead – and we will stand behind you."