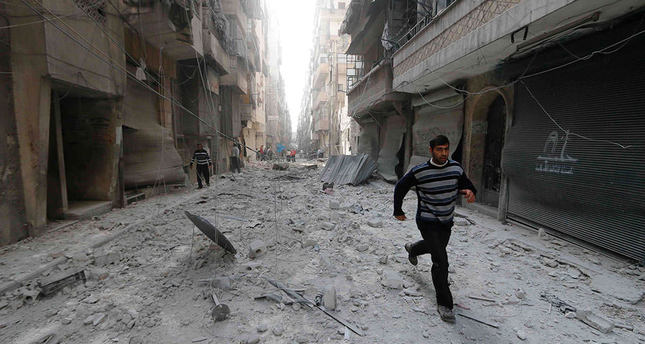 France, like Turkey, says the West must help Aleppo as both the al-Qaida-affiliated Nusra Front and the Syrian regime have begun attacking the FSA

The coalition fighting the Islamic State of Iraq and al-Sham (ISIS) must now save Syria's second city Aleppo as moderate rebels face destruction from forces loyal to President Bashar Assad and jihadi militants, says France's Foreign Minister Laurent Fabius. In a column in French daily Le Figaro, the Washington Post and pan-Arab Al-Hayat, Fabius said the city, the "bastion" of the opposition, is almost encircled and abandoning it would end hopes of a political solution in Syria's three-year civil war. "Abandoning Aleppo would condemn 300,000 men, women and children to a terrible choice: the murderous siege of the regime's bombs or the barbarity of the Islamic State [ISIS] terrorists," Fabius wrote. "It would condemn Syria to years of violence. It would be the death of any political perspective and would see the fragmentation of the country run by increasingly radicalized warlords. It would also export the internal chaos of Syria towards already fragile neighbors Iraq, Lebanon and Jordan," he said.

Fabius' comments came just three days after Turkish President Tayyip Erdoğan was in Paris to meet President François Hollande. During that visit Erdoğan sought backing from Paris for his calls to tackle Assad as well as ISIS. Erdoğan specifically criticized the U.S.-led coalition's action in Syria calling for the focus to shift from the Kurdish town of Kobani near the Turkish border to other areas in Syria. Paris, which is taking part in air strikes in Iraq, has given Iraqi Peshmerga fighters weapons and training, but has ruled out carrying out air strikes in Syria. It says it is providing military aid and training to the ramshackle, but the only recognized and legitimate opposition group, Free Syrian Army (FSA), in Syria but has not given any specific details of its help.

Without giving concrete details of how France proposed to help save Aleppo, Fabius said he could not accept that the city would be left to its fate. "That is why, with our coalition partners, we must turn our efforts to Aleppo ... to strengthen the moderate opposition and protect the civilian population against the twin crimes of the regime and ISIS. After Kobani, we must save Aleppo," the column read.
While the anti-ISIS coalition continues to bomb ISIS targets, the British-based Syrian Observatory Group for Human Rights reported that more than 2,000 prisoners have died inside the regime's cellars since the beginning of this year.

The number of arrested persons, who the Syrian Observatory Group for Human Rights were able to document the deaths of inside the regime's cellars and intelligence branches, has reached 1,917 since the beginning of this year until Oct. 31, when the Syrian authorities turned over some of the corpses to their families while telling others that their sons had died inside the detention facilities instructing them to collect death certificates for them. In addition, they forced some families of those who died inside the cellars to sign declarations that the opposition groups killed their sons. Among the people who were killed inside the regime's cellars, barracks and intelligence branches, were 27 children under the age of 18 and 11 women. The Syrian Observatory for Human Rights also received information that there were people who were tortured to death inside the regime's cellars but their families are reticent about mentioning the death of their sons because they are afraid of prosecution and arrest.

While the regime continues to carry out airstrikes in several rebel-held areas, the al-Qaida-affiliated Nusra Front, which had been fighting against ISIS after ISIS leader Abu Bakr al-Baghdadi declared the group's independence from the Nusra Front, allied with ISIS after the U.S.-led airstrikes started. The Nusra Front had been allied to the FSA. However, it was reported that clashes between the Nusra Front and the FSA erupted near Idlib last week, as the FSA sent fighters to the Kurdish town of Kobani to fight alongside the PKK's official Syrian branch, the Democratic Union Party (PYD), against ISIS with the help of U.S. airstrikes. The Nusra Front edged to less than 6km from the strategic Bab al-Hawa crossing on Monday, a key supply line to Syrian rebels fighting in the northern Idlib province. The Observatory Group said fighters from the Nusra Front were seen gathering in the nearby town of Sarmada. Held by the moderate rebel alliance known as the Islamic Front, Bab al-Hawa poses significance in terms of being the route for the supply of food and medical needs to residents.

Last week the observatory said al-Nusra fighters captured the town of Khan al-Subul after the withdrawal of the Hazm movement, a moderate opposition group. The al-Qaida affiliate also seized another five villages in the province held by Islamist and moderate rebel groups, the observatory said. The advance comes a day after the British-based observatory reported al-Nusra fighters had seized the Idlib bastion of the Syria Revolutionaries Front (SRF), another Western-backed opposition group. The observatory said Saturday that the Nusra Front had captured Deir Sinbel and most of the other towns and villages in the Jabal al-Zawiya area of Idlib province.

The aggression of the Nusra Front on the FSA and the will to make advances toward northern Syria have apparently changed the balances in the war.