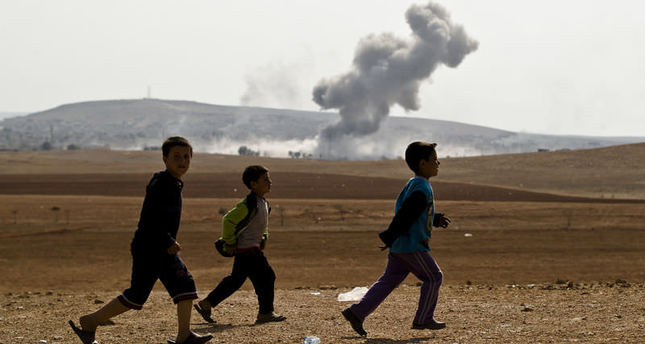 by reuters
Nov 04, 2014 12:00 am
ISIS militants in Syria forced children as young as 14 to watch videos of beheadings and beat them with cables during six months of captivity, Human Rights Watch reported on Tuesday.

The militants abducted a group of children on May 29 as they returned to the Syrian town of Kobani after taking school exams in the city of Aleppo. It freed the final 25 hostages on Oct. 29.

Kobani, a predominantly Kurdish town on the Syrian border with Turkey, has been besieged by ISIS militants for more than a month despite U.S.-led air strikes meant to displace them.

The abuse of more than 150 children, some held as long as six months, amounted to war crimes, Human Rights Watch said, citing testimony from interviews with four boys among the group.

The children described being forced to watch videos of ISIS in combat and the beheading of captives, the New York-based group said.

"Those who didn't conform to the program were beaten. They beat us with a green hose or a thick cable with wire running through it. They also beat the soles of our feet," it quoted one boy as saying.

"They sometimes found excuses to beat us for no reason."

The boys said they were given no reason for their release other than that their education was now over. The last children to be let go are now seeking shelter in Turkey, the rights group said.

Those from families with members fighting with the Kurdish militia, called YPG, which has been defending Kobani, were singled out for abuse, the children said.

Their captors, who came from Syria, Jordan, Libya, Tunisia and Saudi Arabia, "told them to give them the addresses of their families, cousins, uncles, saying, 'When we go to Kobani, we will get them and cut them up.' They saw the YPG as infidels," one 15-year-old boy told Human Rights Watch.

Other Kurdish children and adults are still in captivity, the rights group said. ISIS is also thought to hold around 10 Western hostages, including foreign journalists.