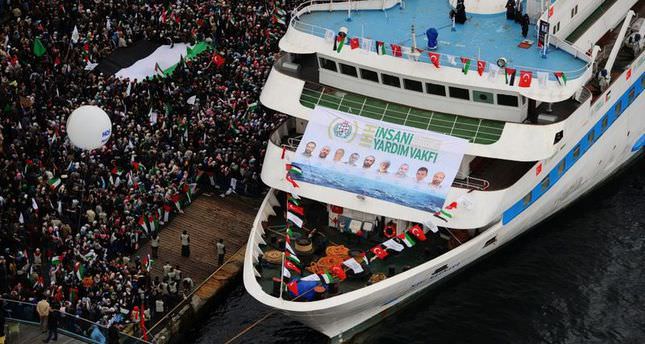 by AA
Nov 05, 2014 12:00 am
Prosecutors of the International Criminal Court at The Hague have told the IHH, a Turkish humanitarian organization Israel is guilty of "war crimes" for attacking a Turkish aid ship for Gaza in May 2010.

The Humanitarian Relief Foundation, a Turkish NGO, in a statement Tuesday said the prosecution team had finished its investigation in the Mavi Marmara case and concluded that Israel committed "war crimes."

In May 2010, Israeli commandos killed eight Turkish nationals and an American of Turkish origin in international waters by using lethal force on the Mavi Marmara, a ship in a "Gaza Freedom Flotilla" carrying humanitarian aid and construction materials for Palestinians in the Gaza Strip, which was under an Israeli blockade at the time.

The aid ship Mavi Marmara belonged to the foundation, whose law committee had filed a petition at the court for a fair and speedy trial in the case. The court took up the petition in March 2014.

In March 2014, Turkey received an apology from the Israeli government.

The two states are now looking to normalize their relations with a deal said to be involving compensation for the victims' families.