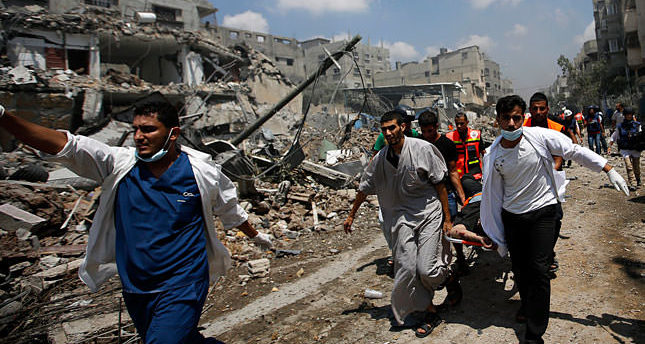 by Yusuf Selman İnanç
Nov 06, 2014 12:00 am
Amnesty International has accused the Israeli military of committing war crimes in Gaza during attacks in the Gaza Strip this summer that left more than 2,100 Palestinians dead, including many civilians, according to Palestinian and U.N. officials. "Israeli forces have killed scores of Palestinian civilians in attacks targeting houses full of families, which in some cases have amounted to war crimes," read the report. The group investigated eight cases and said in the report, "In the eight cases documented by Amnesty International in this report, Israeli aircraft dropped aerial bombs on or launched missiles at homes they knew or should have known had civilians inside. The attacks resulted in the deaths of at least 111 individuals, including at least 104 civilians, and injured many others. Some 34 apartments and neighboring houses, home to more than 150 people, were destroyed or badly damaged in these attacks."

Moreover, the report said, "According to the Rome Statute of the International Criminal Court, intentionally directing attacks against the civilian population as such or against individual civilians not taking direct part in hostilities and intentionally directing attacks against civilian objects constitute war crimes. In addition, regarding the destruction of entire homes, including apartment buildings, the 1949 Fourth Geneva Convention regulates Israel's actions as the occupying power in the Gaza Strip." Further chastising Israel as Gaza's occupying force, the report indicated that "any destruction by the Occupying Power of real or personal property belonging individually or collectively to private persons, to the State, to other public authorities or to social or cooperative organizations is prohibited, except where such destruction is rendered absolutely necessary by military operations."

The report also cited international humanitarian law, which "also prohibits disproportionate attacks, [which are those that] may be expected to cause incidental loss of civilian life, injury to civilians, damage to civilian objects or a combination thereof, which would be excessive in relation to the concrete and direct military advantage anticipated. Intentionally launching an indiscriminate attack resulting in death or injury to civilians, or a disproportionate attack [which, knows that the attack will cause excessive incidental civilian loss, injury or damage] constitutes a war crime."

"The report does not mention the word terror in relation to Hamas or other armed Palestinian groups, nor mentions tunnels built by Hamas to infiltrate Israel and perpetrate terror attacks," said the ministry in a statement.

"Israeli forces have brazenly flouted the laws of war by carrying out a series of attacks on civilian homes, displaying callous indifference to the carnage caused," said Philip Luther, Director of Amnesty's Middle East and North Africa program. "The report exposes a pattern of attacks on civilian homes by Israeli forces, which have shown a shocking disregard for the lives of Palestinian civilians who were given no warning and had no chance to flee," Luther added.

The report contains numerous accounts from survivors describing their frantic digging through the rubble and dust of their destroyed homes in search of the bodies of children. At least 18,000 homes were destroyed or rendered uninhabitable during the conflict.