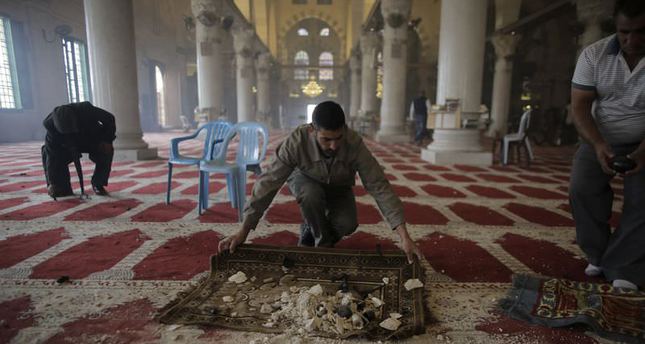 by Daily Sabah with AA
Nov 07, 2014 12:00 am
Israel continues to impose restrictions on access to Al-Aqsa Mosque.

Israeli police have been deployed in East Jerusalem since early Friday morning, with roadblocks erected at all entrances to the Old City.

"Israeli police have banned all men under 35 from entering the compound," Sheikh Azzam al-Khatib, director-general of the Organization for Muslim Endowments and Al-Aqsa Affairs, a Palestinian NGO, told Anadolu Agency.

Clashes have been taking place between the Israeli armed forces and the Palestinians in East Jerusalem since last week, when an extremist rabbi was shot in west Jerusalem.

Al-Aqsa Mosque holds a significant place in the Muslim world, as well as for Jews and Christians. For Muslims, it is the third holiest place, after Mecca and Medina, while for the Jewish commuity it is part of the area which is claimed to be the "Temple Mount".

Current developments in East Jerusalem have attracted the attention of the international community, and have been condemned by the Muslim world.

Turkish President Erdogan said that Israel's violent attitude towards Al-Aqsa mosque and Jerusalem damages regional peace. He called on Israel to stop the attacks in order for peace in the region to be sustained, before his trip to Turkmenistan yesterday.