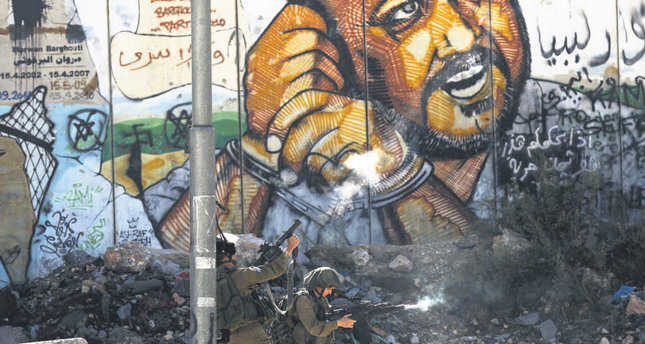 by Daily Sabah Nov 09, 2014 12:00 am
The Israeli Defense Force (IDF) delivered an order on Saturday informing Palestinians of Israel's plans to confiscate 3,176 acres around the West Bank village of Beit Iksa for military purposes. The Palestinian Maan News Agency reported that soldiers at the military checkpoint at the entrance to the village delivered confiscation orders signed by the Israeli military commander in the West Bank, Nitzan Alon, that gave them until Dec. 31, 2017 to leave their land. The villagers told Maan the Israeli soldiers informed them that an official from the Israeli military liaison would arrive on Monday to specify which lands would be confiscated, adding that the lands confiscated would be used for "military purposes." Maan said if the confiscation is carried out, it would dramatically reduce the land available to Beit Iksa's 1,700 people, the majority of whom are refugees who fled to the area in 1967 after the existing population of the village was forced to flee by Israeli authorities. The village is currently surrounded on all sides by the Israeli separation wall. The lands around the village have already been confiscated and the villagers cannot travel to Jerusalem without receiving permission from Israeli authorities. Ninety-three percent of the village is under full Israeli military control, and the majority of the total land of the village falls in areas outside of the separation wall, meaning they have been de facto confiscated, including about 371 acres where Jewish-only settlements have been built, Maan reported. The head of the Beit Iksa village council Saada al-Khatib told Maan that according to the order and the maps that soldiers had shown them Saturday, the lands that will be confiscated are between parcels 7 and 8 and include Haraeq al-Arab, Thahr Biddu, Numus and Khatab areas around the village.

The issue of the confiscation order came in a chaotic atmosphere in the country as Israeli forces and illegal settlers entered Al-Aqsa Mosque triggering mass protests organized by Palestinians. While the international community, including Turkey, the U.S. and the EU harshly criticized Israel for escalating tension in the region, Israel has not stepped back and threatened to denationalize the Israeli Arabs and pass a bill that allows Jewish people to pray in Al-Aqsa Mosque. The Israeli aggression toward Palestinians is considered a part of daily life. For instance Israeli forces raided a hospital in East Jerusalem late Saturday and detained a young Palestinian man without any explanation. Palestinian authorities have demanded the United Nations stop Israel from behaving arbitrarily toward Palestinians.