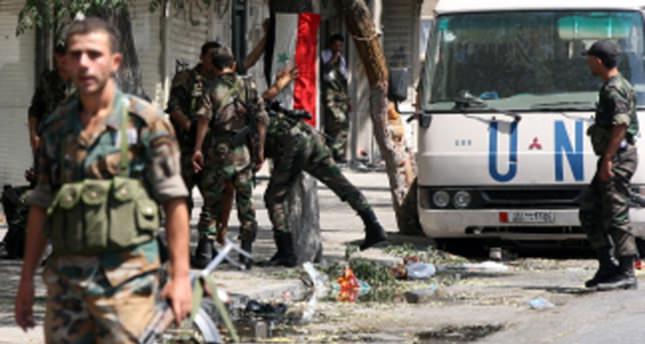 by Yusuf Selman İnanç
Nov 11, 2014 12:00 am
Human Rights Watch (HRW) revealed that a Syrian national, Mahmoud Abdul Rahman Hamdan, was forcibly returned to Syria by the Lebanese government on Sep. 28 despite his fear of detention and torture by the forces loyal to the regime. A former Syrian detainee told his relatives that he saw Hamdan in the custody of the Syrian Army on a base close to the Lebanese border. The forced return of anyone in danger of torture or inhuman or degrading treatment contravenes Lebanon's obligations under the international Convention Against Torture (CAT). "There is no justification for sending anyone into the hands of a government that is likely to torture them," said Nadim Houry, deputy Middle East and North Africa director of Human Rights Watch. "Lebanon's efforts to promote security and stability must respect basic human rights. Deporting someone at risk of torture shows a total disregard for their rights and safety."

HRW urged the Lebanese government to immediately investigate Hamdan's fate and whereabouts, publicly report on their findings and hold anyone found guilty of breaching Lebanon's international obligations accountable. In response to social media reports alleging the deportation of Syrian nationals, Lebanese General Security released a statement on Sept. 29 in which they denied forcibly returning Syrian nationals to Syria but did not mention any individuals by name.

Under Article 3 of the Convention Against Torture, which Lebanon ratified in 2000, Lebanon cannot send anyone – including a convicted criminal – to a country where the person would face a real risk of torture, HRW said.

HRW previously exposed that the Lebanese government forcibly returned about three-dozen Palestinians to Syria on May 4, putting them at grave risk. On the same day, the government also arbitrarily denied entry to Palestinians crossing over the border from Syria. "The Lebanese government is bearing an incomparable burden with Syrian refugees crossing its borders, but blocking Palestinians from Syria is mishandling the situation," said Joe Stork, another deputy director of HRW's Middle East and North Africa division. "Palestinians are among the most vulnerable people in the Syria conflict, and like Syrian nationals are at risk of both generalized violence and targeted attacks."

The Lebanese government has long been trying to prevent the war from spilling over into their country. The country fears facing a war in its territories since the Lebanon-based Shiite group Hezbollah has sided with the Assad regime and been fighting against the opposition groups and al-Nusra Front has been attacking the villages near the Syrian border. Both the government as well as minority groups are also worried. For instance, members of Lebanon's minority Druze sect say they are ready to defend their towns and villages with arms if the civil war raging next door gets closer. "Here in the east, the danger has become very close to us, it is right in our faces and in our lives," said Ali Fayik, a regional official speaking in the predominantly Druze town of Rashaya, set in steep mountains with a panoramic view over the region.