Barzani: 'If KRG cannot form alliance with Iraq, it has another option' 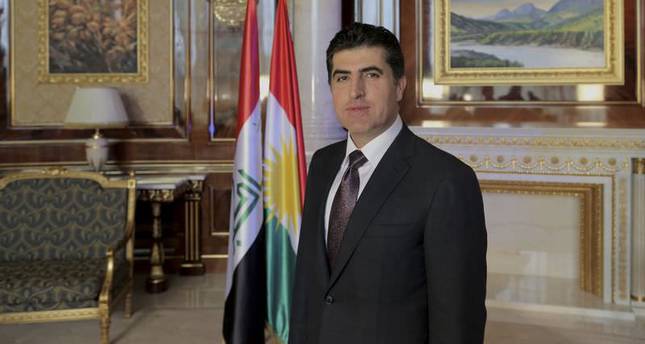 by AA Nov 11, 2014 12:00 am
The Prime Minister of the Kurdish Regional Government (KRG), Nechirvan Barzani, accused the central Iraqi government of not keeping its promises by not sending their share of the budget and not paying salaries of Iraqi Kurdish officials, an Anadolu Agency correspondent reported on Monday.

In an interview with the press after a closed-door session of Kurdish Regional Government Parliament, Nechirvan Barzani gave his insight into the economic crisis in Kurdish Iraq, problems in central Iraq and his solutions to these issues.

"As the Kurdish Regional Government, our priority is to form an alliance with the Baghdad government. If this does not happen, we have another option," he said.

Barzani accused Iraqi Prime Minister Haider al-Abadi of not fulfilling his promise to pay the share of the Kurdish Regional Government from the Iraqi budget, where, in exchange part of the Iraqi Kurdish oil was supposed to be sold through Iraq's State Oil Marketing Organization.

Barzani also expressed his contentment over the developing relations between Turkey and the central Iraqi government saying, "Tension between the two countries is not to our benefit. Thus Iraqi foreign minister Ibrahim el-Caferi's visit to Turkey pleased us."

The tension between the Iraqi central government and Kurdish Regional Government peaked when the Baghdad administration froze the monthly budget allocated to the latter early this year.

However, the main fault line between Baghdad and Erbil lies in the status of disputed regions, including the oil rich province of Kirkuk, and the sale of Iraqi Kurdish oil through Turkey, which Baghdad consider a violation of the federal constitution.