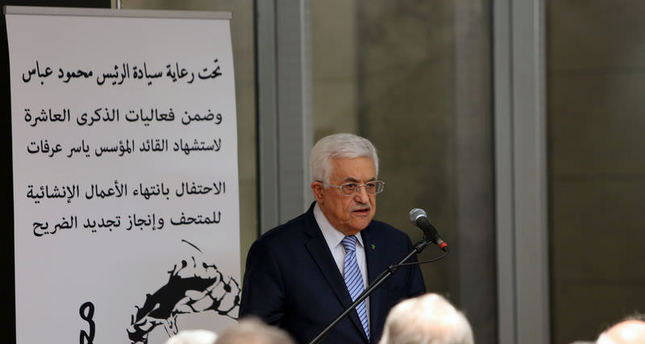 by Daily Sabah with Agencies
Nov 11, 2014 12:00 am
The Palestinian president Mahmoud Abbas has accused Israel of igniting a "religious war" by allowing Jewish worshippers to visit the holy site, Al-Aqsa Mosque, which has been part of an ongoing conflict between Israel and Palestine.

Abbas blamed Israel for taking provocative steps and said that Palestinians will defend the respected holy site, which is revered both by Jews as the Temple Mount and by Muslims as the Noble Sanctuary.

Currently, Jews are allowed to visit the site, but are forbidden from using it for religious rituals and praying. The current restrictions and attacks by the Israeli police on the site, as well as the increase in the number of visits has sparked clashes in the past few weeks.

Palestinian Muslims are concerned that the increasing number of Israel's attacks are part of an orchestrated plot to take of over the holy site. On Tuesday, Israeli troops shot and killed a Palestinian demonstrator in clashes in the West Bank.

"Palestinians have the right to defend Al-Aqsa", Abbas said in his remarks at a ceremony marking the 10th anniversary of the death of Palestinian leader Yasser Arafat.